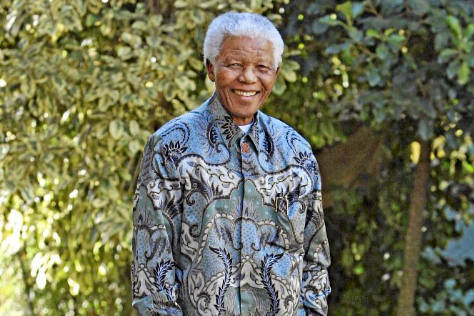 Nelson Mandela in one of his trademark Madiba shirts. Arts minister Nathi Mthethwa has called for a stop to the auctioning of some of the items associated with Mandela, including the key to the cell in which Mandela was locked during his incarceration on Robben Island.
Image: Arena Holdings archive

Sports, arts and culture minister Nathi Mthethwa has ordered that urgent action be taken after reports of plans to auction the key to the cell of the first democratic president of SA Nelson Mandela during his incarceration on Robben Island.

The minister said according to an article in the Daily Mail, auction house Guernsey's intends to proceed with the auction next month.

The report indicated that Christo Brand, who was Mandela’s jailer, is the seller of the key.

The auction house announced it will, on January 28, be conducting an unprecedented auction of historic objects relating to the life of Mandela.

The key must be returned to its rightful owners with immediate effect and this auction must be halted.

Apart from the key, other objects included will be his iconic “Madiba” shirt, and treasured gifts given to Mandela by Harvard University and former US president Barack Obama and Michelle Obama.

“His eyeglasses, ceremonial pens he received from President George W Bush and the UN, and a powerful bronze cast of his fist are further examples of the historic objects being offered,” the auction house said.

Mthethwa said the government was considering writing to the auction house to ask it to stop the auctioning of these items.

“It is unfathomable for Guernsey's, which is clearly aware of the painful history of our country and the symbolism of the key, to consider auctioning the key without any consultation with the SA government, the heritage authorities in SA and Robben Island Museum.

“This key belongs to the people of SA under the care of Robben Island Museum and the SA state. It is not anyone’s personal belonging,” Mthethwa said.

Guernsey's is quoted saying: “What the key symbolises is an extraordinary part of the history not just of SA but the world.”

Mthethwa said this affirmed the view that the auction house should understand the significance of the inappropriateness of its planned auction.

He said because Robben Island is a national monument, national museum and a world heritage site, the island itself, its buildings and objects associated with it form part of its various declarations and have cultural, heritage and historical significance.

The key in question, therefore, has symbolic connotations of struggle, deprivation of freedom and the incarceration of those who fought for freedom in.

He said Robben Island Museum has a legal mandate to collect and preserve objects associated with the prison for all the people of SA and the world.

“The key must be returned to its rightful owners with immediate effect and this auction must be halted,” Mthethwa said.

“I am currently in discussions with the Robben Island Museum council, the minister of justice and correctional services, Ronald Lamola, and the National Heritage Council to consider appropriate steps that must be taken to stop the auction and to secure the return of the key to SA.”

The Nelson Mandela Foundation (NMF) has urged South Africans to heed the call by the UN to champion for peace, vaccination equality and the struggle ...
News
6 months ago

A letter signed by the late former statesman Nelson Mandela and 23 other Rivonia trialists appealing for funds to cover legal costs for their treason ...
News
8 months ago

The trustees of The CEO SleepOut Trust initiative says discussions for over a year preceded its attempt to auction a night in Nelson Mandela's former ...
News
3 years ago
Next Article