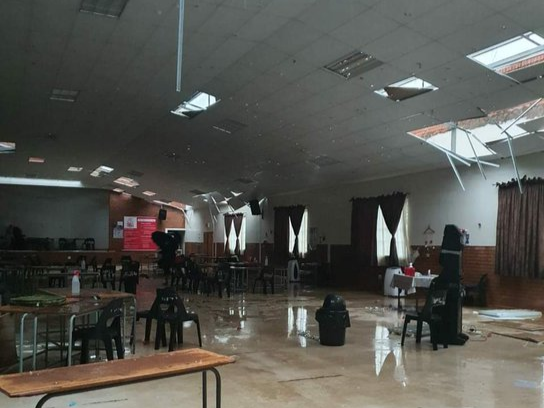 Some of the damage at Albert Moroka High School in Thaba Nchu, where matric papers were being marked.
Image: Twitter: @Tutu59181128

The basic education department said on Monday that all matric exam scripts that were affected by a storm which damaged a marking centre in Thaba Nchu, Free State, have been accounted for.

The roof at Albert Moroka High School, which was being used as a marking centre for accounting paper 2 and business studies paper 2, was blown off while marking was under way on Wednesday.

“Accounting P2, as indicated in previous reports, all scripts have been accounted for. In business studies P2, the one script that we were looking for has been found. All scripts for the centre can now be accounted for thanks to the hard work of the team,” said the department.

There were 24,519 scripts for the two exams that had been delivered for marking at the centre, it said.

Chief director for public examinations and national assessments Dr Rufus Poliah said: “If it were not for the sacrifice and quick-thinking by the markers and staff, the damage could have been worse. They worked hard to save the scripts and proceeded to work around the clock to locate the scripts which were initially reported to be missing in the chaos that happened during the storm.”

Poliah added that a decision to move the marking centre to a new location in Bloemfontein helped ensure continuity.

The department said marking and the capturing of marks at the new location was progressing well.

The department expects marking to conclude on Wednesday, as planned.

Only one out of 24,519 matric exam scripts is missing after a storm ripped the roof off a Free State high school being used as a marking centre.
News
1 month ago
Next Article