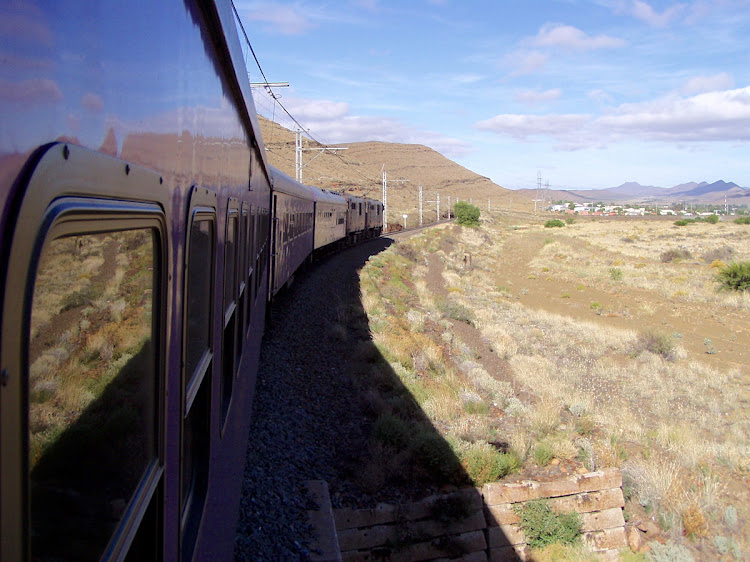 This file photo shows a long-distance passenger train in the Karoo in the Western Cape. Prasa has not given dates on when service between Cape Town and Johannesburg will resume.
Image: Kim Ash

It was no easy ride home after the first long-haul passenger trains to run for almost a year were so delayed that passengers had to complete their journeys by bus.

In a long-awaited return to service, two Shosholoza Meyl long-distance passenger trains set off on Wednesday, one in each direction on the Johannesburg-East London route.

However, the southbound train suffered a 24-hour delay just short of Kroonstad, 190km from Johannesburg, due to cable theft, according to social media reports.

Meanwhile, the northbound train from East London reached as far as Vereeniging before it, too, was halted by cable theft, said Passenger Rail Association of South Africa (Prasa) spokesperson Andiswa Makanda.

“While the trip got off to a good start, unfavourable weather conditions, sabotage of the rail network and cable theft forced management to put in place a contingency plan to get passengers safely home,” she said.

The East London-bound passengers boarded buses at Virginia, Free State, for the rest of their journey, while the northbound passengers travelled from Vereeniging by minibus.

Makanda said the agency had “managed the situation” by keeping passengers informed on developments and providing them with food and alternative transport.

“A train was also dispatched from Johannesburg to carry the large luggage of some of our passengers to their destinations,” Makanda said.

The first six months of operations, which began on December 15, will see Prasa focus on employee and customer safety, bringing back customers, generating revenue and sustainability, the rail agency said.

Apart from cable theft, other challenges facing the operators included cables left strewn over the tracks by thieves, heavy rainfall that prevented technicians from working and 30km/h speed limits.

Cable theft has also forced Prasa to resort to manual train operating and single-line operating procedures on some sections.

As most of the overhead power cables from which electric locomotives draw power on Prasa's network in Gauteng have been stolen, the agency has had to hire diesel locomotives from private operators to haul its trains.

Long-distance passenger train services were suspended in January because of Covid-19 and widespread vandalism along numerous routes, where overhead electric power cables were stolen and stations destroyed.

The first six months of operations, which began on December 15, will see Prasa focus on employee and customer safety, bringing back customers, generating revenue and sustainability, the rail agency said.

With the Johannesburg-East London route, services will also operate on lines to Gqeberha, Bloemfontein via Kimberley and to Musina via Polokwane.

The first train to Gqeberha was due to depart on December 17, with a train from Johannesburg to Bloemfontein via Kimberley.

Prasa said on Saturday that the first service from Johannesburg to Gqeberha on December 17 had also “experienced similar challenges”.

The agency had arranged alternative transport to ferry passengers to their destinations.

Only 17% of Prasa’s railway network in Gauteng is functional: audit report

Only 17% of the Passenger Rail Agency of SA's network in Gauteng is functional, transport minister Fikile Mbalula revealed during a written response.
News
5 months ago

Mental health support could help suppress HIV among the depressed

After more than 20 years of living with HIV and having an undetectable viral load for most of the time, Nonceba of Khayelitsha in Cape Town did not ...
News
5 months ago
Next Article