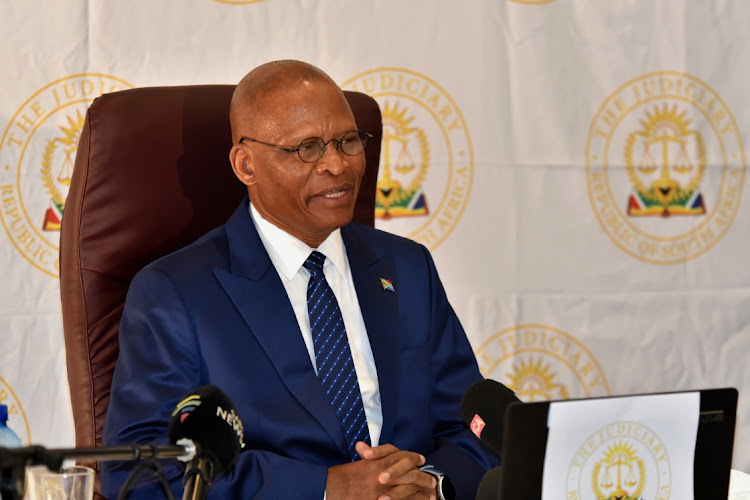 Former chief justice Mogoeng Mogoeng's recusal is being sought by Cosatu and Bongani Masuku in a hate speech case between them and the South African Human Rights Commission.
Image: Freddy Mavunda

Comments by former chief justice Mogoeng Mogoeng on SA’s foreign policy towards Israel have led to an application for his recusal from a case in which judgment is already more than two years outstanding.

If Mogoeng recuses himself, it could mean an even longer delay as the Constitutional Court would, without him, not be quorate. This could mean the court would either have to reconvene to hear the case again or another justice would need to study the court record.

The recusal application was made by union federation Cosatu in the case between the South African Human Rights Commission, on behalf of the South African Jewish Board of Deputies (SAJBD), and Cosatu’s Bongani Masuku.

The commission claimed that statements made by Masuku in the aftermath of the brutal Gaza War in 2009 amounted to hate speech under the Promotion of Equality and Prevention of Unfair Discrimination Act.

The statements, in which Masuku mentioned Zionists belonging to “the era of their friend Hitler”, were made during a speech he gave at Wits University and during an earlier march planned for the offices of the board of deputies and the South African Zionist Federation. He said the statements were political speech, directed at Israel and Zionism and not at Jews.

The case reached the highest court in August 2019. Judgment was pending when, in June last year, Mogoeng caused an outcry in a webinar hosted by the Jerusalem Post. Asked about the sometimes “tense” diplomatic relations between SA and Israel, he said that while he considered himself bound by SA’s policy positions, as a citizen he was also entitled to his views.

He quoted the Bible at length and said that despite neocolonialism, which was still causing suffering to Africans, SA had not cut ties with or disinvested from its former colonisers, and its position needed reflection. After the webinar and responding to the public outcry, Mogoeng said during a virtual prayer session that he would never apologise for his remarks – “even if 50 million people can march every day for the next 10 years”.

The comments led to three complaints of judicial misconduct to the Judicial Conduct Committee, which later found Mogoeng had indeed committed misconduct.

He has appealed the decision. But Cosatu has said Mogoeng should have at least told the parties before the webinar that he was going to participate. He had also responded “dismissively and with intemperate language” to Africa4Palestine and Boycott Disinvest and Sanctions (BDS) Coalition-SA, two organisations that were allies of Cosatu, said Cosatu’s secretary-general Bheki Ntshalintshali in an affidavit.

Ntshalintshali said Mogoeng had shown “unconditional” support for Israel and was critical of the BDS campaign that Cosatu supported and which “formed the context of the statements made by Mr Masuku”.

The Masuku judgment was first delayed because the hearing was soon followed by a hate speech case involving former journalist Jon Qwelane, who wrote a derogatory article comparing gays and lesbians to animals.

After the Qwelane decision was handed down by the Constitutional Court in August this year — in which it found his article constituted hate speech — it was expected that a decision would soon follow on Masuku.

Instead, the Constitutional Court on October 15 — four days after Mogoeng had retired — wrote to the parties asking for their view on Mogoeng’s participation. After Cosatu responded to say Mogoeng ought not to be part of the panel, but would leave the decision to his conscience, the court directed that parties either make a formal rescission application or withdraw their objections.

Mogoeng Mogoeng has called on elected representatives in parliament to play their constitutional role in holding the executive accountable and ...
News
7 months ago

The court then also informed them that Mogoeng had been contacted by the South African Zionist Federation – offering him support with the complaint against him. He did not respond to the message, he said. While the message – an attempt to “curry favour,” said Ntshalintshali -  was not elicited by Mogoeng, once it was made, “it could not, with respect, simply be ignored,” said Ntshalintshali.

“Mogoeng CJ ought to have unequivocally rejected the offer and made it clear to the SAZF that it was improper,” he said.

Ntshalintshali said the rescission application was made “reluctantly and with heavy hearts”. But he said the “cumulative effect” of Mogoeng’s statements and actions were “such that Cosatu and Mr Masuku have a reasonable apprehension that Mogoeng CJ will not bring an impartial mind to bear” on the case.

The Human Rights Commission said in a letter that the SAJBD’s position was that it would abide by the court’s decision should any objection be received. It said that when the case was heard by the Supreme Court of Appeal, Justice Carole Lewis had, prior to the hearing disclosed to the parties that she had signed a letter in 2009 by the later Chief Justice Arthur Chaskalson to the Zionist Federation, in which a number of members of the Jewish community protested support for the use to excessive force.

The board’s view was that, like Lewis, Mogoeng was not disqualified “for having expressed views on the wider Middle East conflict”.

When the case got to the Constitutional Court, it was heard by just eight justices, which is the minimum allowed under the constitution, instead of the usual 11. A recusal would mean that the court would not be quorate.

Friend of the court, the Rule of Law Project, said Cosatu had not made out a case for recusal and a recusal would mean a longer delay — the court would either have to reconvene to hear the case again or another justice would need to study the court record.

In the famous John Hlophe case, the Constitutional Court could not achieve a quorum because too many of its justices were conflicted, so the decision of the Supreme Court of Appeal (SCA) became the final one. Another friend of the court, the South African Holocaust and Genocide Foundation, said it would not be in the interests of justice for the SCA decision to stand in this case.

The foundation said the SCA judgment, which found Masuku’s favour, was flawed – as many parties had argued. It said it would abide by the decision of the court on Mogoeng’s recusal, but if the court decided Mogoeng should recuse himself then the court should reconvene and hear the case again.