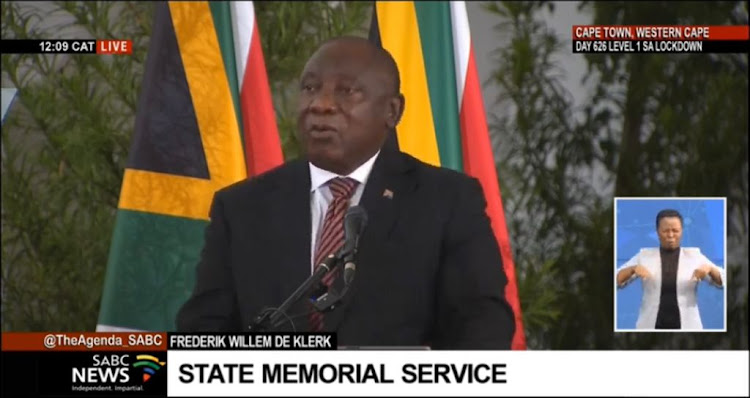 President Cyril Ramaphosa says while the country's last apartheid-era head of state FW de Klerk played a critical role in the transition to democracy, the anger of those critical of his legacy must never be dismissed.

Ramaphosa made the remarks while delivering a eulogy at a state memorial service for De Klerk in Groote Kerk in Cape Town on Sunday. The service got off to a shaky start as a handful of protesters attempted to disrupt it, saying  it was a painful reminder of apartheid.

The president said: “We recall that President Mandela’s statement that De Klerk was a man of integrity was put to the state as state-sponsored violence continued to ravage communities in what is now known as KwaZulu-Natal and Gauteng.

“We can neither ignore nor must we seek to dismiss the anger, pain and disappointment of those who recall a place FW occupied.

“We cannot forget the lives that were lost, the land that was taken, the livelihoods that were destroyed because of the implementation of apartheid policies, the rights that were denied and the dreams that were shattered and dashed.”

De Klerk died last month aged 85 after a long battle with cancer. He was laid to rest in a private ceremony.

“We cannot forget the humiliation of an entire people, the degradation, inhumanity, and a cruelty nor must we forget the responsibility that we each bear to consign such suffering and injustice to the past.”

The state memorial service of former president FW De Klerk got off on a shaky start on Sunday as a handful of protesters took to the venue in an ...
News
5 months ago

Despite this, the president said South Africans had a responsibility to help build a nation dedicated to the realisation of the potential of all.

Ramaphosa also defended the decision to forge ahead with the memorial amid a public outcry and disruption threats, saying he remained a son of the African soil.

The president made an impassioned plea to South Africans to allow de Klerk to rest in peace.

I call on all of us to now release him, so that he may be at peace.

“I call on all of us to now release him, so that he may be at peace.”

Reflecting on their personal relationship, Ramaphosa said he found De Klerk a worthy opponent even during times of disagreements.

“A man of great intellect who could argue his point, he could be prepared to compromise, but could also dig in his heels. Sometimes he offered me counsel, sometimes I did the same.

“There were times when strong words were exchanged between us, yet even in moments of difficulty at times when we were close to the brink, I found him to be courteous, respectful and committed.”

De Klerk shared the Nobel Peace Prize in 1993 with Nelson Mandela for their work for the peaceful termination of the apartheid regime, and for laying the foundations for a new democratic SA.

As the leader of the National Party, which initiated and whose official policy was apartheid, he announced broad reforms and plans for a new constitution. They included the unbanning of liberation movements, the release of political leaders from prison, and the start of negotiations for a transition to a democratic country.

“FW de Klerk’s speech on February 10 1990, in which he announced the unbanning of political parties and the release of Nelson Mandela and other political prisoners, was a brave act,” Ramaphosa said.