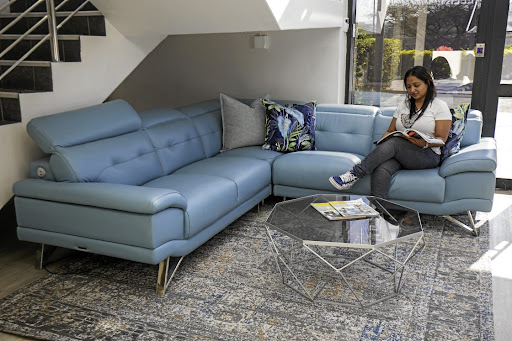 Sumaya Mahomed on the famous blue couch that was stolen and later found on the side of a road.
Image: Rogan Ward

Recovered from a pavement in a Durban informal settlement after being looted from a warehouse in July, SA’s famous blue couch is currently on tour.

In July the R67,999 couch was the subject of a meme when it was photographed in an informal settlement hours after it had been stolen from Leather Gallery’s Springfield warehouse during unrest and looting which swept through KwaZulu-Natal.

“Our famous blue San Pablo Leather Corner Couch is being featured in malls in which our stores are located. We decided to take the famous couch on tour as it has received such a great reaction in Durban at our showroom at our flagship warehouse and head offices,” Leather Gallery owner Greg Parry said on Friday.

“The blue San Pablo Leather Corner Couch was such a light in those dark times during the looting and went viral on social media and in the news, making people forget about the terrible things happening around them for a moment and lightened their moods.

“We hope to continue this tour and will keep our customers and community updated on our social media about where it will be going next,” said Parry.

One of Leather Gallery’s owners confirmed it was the couch at the police station on July 26, and the company fetched it the next day.

“Unfortunately, the missing piece of the couch was never found. However, we did our best to repair the damage,” Parry said.

The company also recovered its Highpoint Leather two-seater sofa which had been stolen during the looting, from the same police station.

“To our knowledge there were no arrests,” said Parry.

The owners of a a Durban furniture store are making their way to Sydenham Police Station on Tuesday morning to identify recovered furniture, which ...
News
6 months ago

The owners of a Durban furniture store are offering a reward for information about a missing piece of SA's most famous blue couch.
News
6 months ago
Next Article