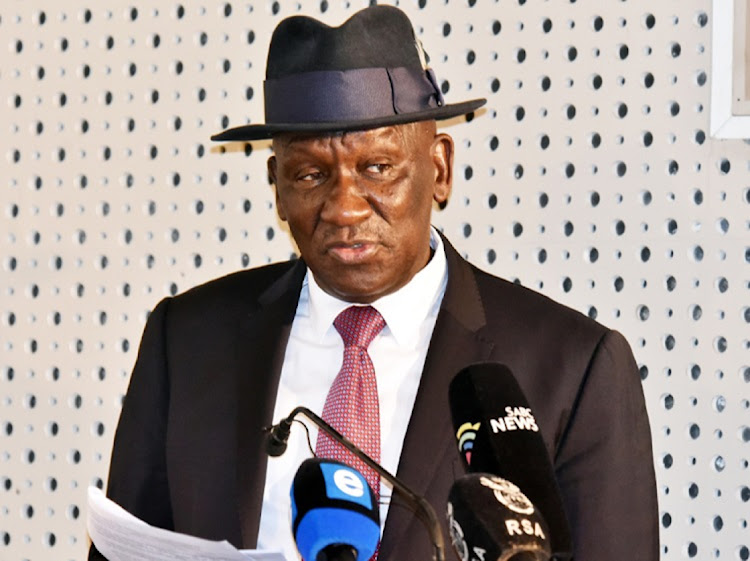 Police minister Bheki Cele could not have provided “executive direction” during the July unrest and looting because he did not receive any intelligence reports from national commissioner Lt-Gen Khehla Sitole or crime intelligence.

Cele made this assertion in an affidavit he will present to the SA Human Rights Commission (SAHRC) on Friday afternoon.

He said his office had later learnt an intelligence report was “seemingly” distributed to Sitole, deputy national police commissioner Lt-Gen Fannie Masemola and senior managers within the crime intelligence division.

Cele said he was not aware of any intelligence report generated by the crime intelligence division of the police service.

“It is expected that crime intelligence compile and dispatch multiple intelligence reports to enable the executive and the minister to provide better executive direction during the unrest, which did not occur.

“The police management, therefore, failed to inform/brief me thus, leaving me to rely on my own resources. I had to work with people on the ground in an effort to contain the unrest,” said Cele.

According to Cele, Sitole had not set foot in affected areas during the unrest and looting.

“It was only me who visited the affected areas in KwaZulu-Natal and Gauteng to calm the situation and to try to unite communities affected by the unrest.

The minister was of the view there was no concerted or integrated effort from the police crime intelligence division, policing divisions and top management to properly plan for and address the unrest “that eventually led to the weeklong destruction, looting, insurrection and loss of life in KwaZulu-Natal and Gauteng”.

“Given the high-profile nature of the subject under discussion, I expected from the national commissioner to obtain and provide me with an initial threat and risk assessment/early warning report ahead of the unrest, and thereafter through continuous feedback, updates and briefings with the aim to provide insight and understanding to enable me to make a contribution to broad strategies, policies and resources,” Cele said.

He said the police service was exposed as being inadequate during the riots and looting.

This, he said, could be attributed to a lack of “proactive” intelligence and crime intelligence’s failure to forewarn.

“I am also not aware if a plan was developed by crime intelligence in response to the unrest, before and after.

“It is not something that happened overnight. Crime intelligence should, therefore, have been able to forewarn based on the sentiments on the ground, had they activated their source networks timeously.”

Cele said those responsible for failing to share the intelligence reports must be held accountable “as they breached their statutory obligations and their actions possibly constitute an intelligence failure as they failed to forewarn me, the minister of police, and/or government appropriately”.

The inquiry may recall former defence minister Nosiviwe Mapisa-Nqakula to answer the allegation that she lied in testimony to the Human Rights ...
News
7 months ago

KZN police commissioners who have been accused of being inept during the July unrest have taken a swipe back at the former defence minister and her ...
News
7 months ago
Next Article