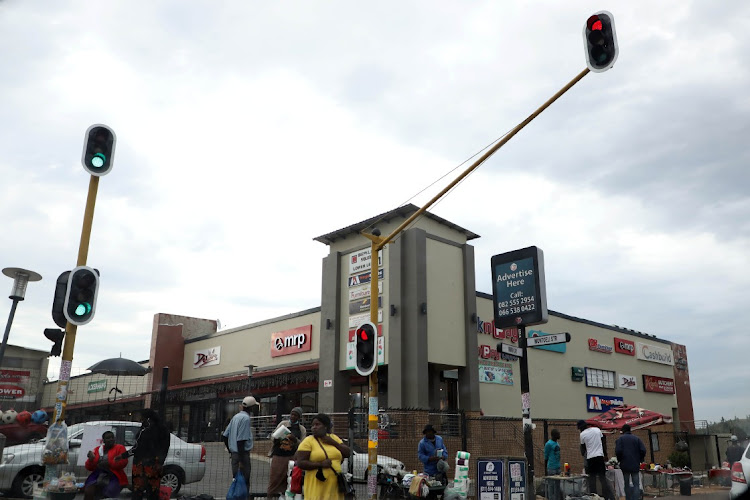 Police and security guards in Diepkloof, Soweto are on high alert guarding the Diepkloof Square shopping centre after the circulation of voice notes on social media threatening to loot the centre amid the protests over power cuts.
Image: ANTONIO MUCHAVE

Police and private security in Diepkloof, Soweto, are on high alert guarding the Diepkloof Square Shopping Centre after the circulation of voice notes on social media threatening to loot the centre amid protests over power cuts this week.

When Sowetan visited the shopping centre on Thursday, it was quiet with customers doing shopping.

Centre manager Jabulani Sibiya said there had been no attacks at the mall thus far.

“I got the voice note on Wednesday night around 7pm, and immediately alerted our security team to be on the lookout and protect the centre from any potential threats. The residents were protesting yesterday [Wednesday] in the community but they did not come to the mall. So far there have been no incidents [attacks],” said Sibiya.

On Wednesday, there were protests in the area over power cuts. Community members said they had not had electricity for almost a week.

On Thursday, the roads were still barricaded with large rocks and debris of burned tyres from Wednesday’s protests.

Police officers from Diepkloof police station who spoke to SowetanLIVE on condition of anonymity said they were aware of the threats and together with the Johannesburg metro police were patrolling around the area and the mall.

The inquiry may recall former defence minister Nosiviwe Mapisa-Nqakula to answer the allegation that she lied in testimony to the Human Rights ...
News
5 months ago

His testimony was appalling and gave a glimpse into his questionable ability to lead the police.
Opinion
5 months ago
Next Article