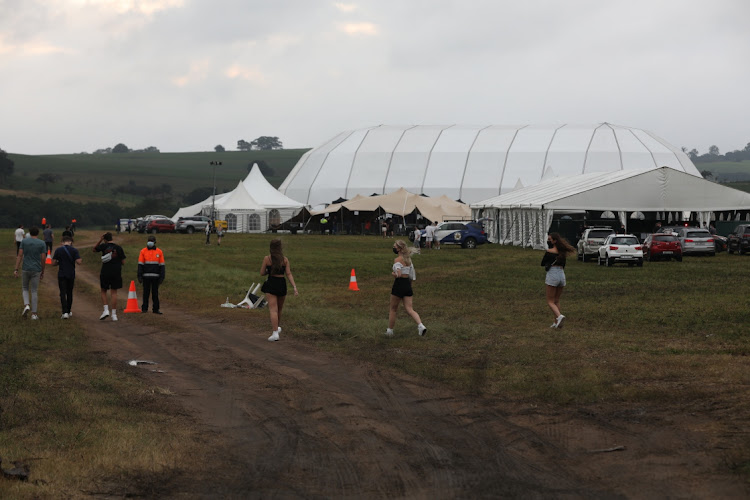 Overview of the venue where 2021 Ballito Rage was to take place. The event has since been cancelled.
Image: Sandile Ndlovu

To Rage, or not to Rage?

This was the question on the lips of most South Africans as the annual festival held in Ballito, KwaZulu-Natal, kicked off on Tuesday in spite of the public disapproving of its continuation in light of the Omicron variant and upsurge in the number of infections.

The question was emphatically answered on Wednesday morning after organisers of the Rage Festival cancelled the event after 36 people tested positive for Covid-19 on the opening day of the week-long event.

This comes after mounting pressure from the public fearing that the event would contribute to the rising number of Covid-19 infections.

In a statement released by the organisers on Wednesday, it reported that out of the 940 guests and staff who were tested, 32 guests and four staff members tested positive.

“After further exhaustive review this morning (Wednesday), consultation and guidance from the local and provincial departments of health and other key stakeholders, the decision was collectively made to cancel the event going forward based on the data now available to us,” said the organisers.

This is despite the event organisers reassuring the public that adequate precautionary measures would be taken to curb the spread of the virus during the festival.

“The festival opened for the first time on Tuesday 30 November 2021 with unprecedented Covid-19 protocols in place, including mandatory vaccinations for all staff and guests and pre-arrival Covid-19 tests for all guests. A testing facility was set up near the event site and staff testing commenced on 29 November 2021; of the first 122 staff tested, zero presented positive,” said the organisers.

The event was severely criticised as a Covid-19 supers-preader last year after 848 positive cases (846 of which were festival goers and two festival staff) tested positive.

There are widespread concerns about the new Omicron variant detected in SA, with  Britain and other European countries banning flights from SA.

The health department is concerned about a surge in the Covid-19 infection rate largely among young people in Gauteng.

“Whilst we understand the disappointment that this causes for those who were looking forward to enjoying the festival, these are unprecedented times. We appreciate everyone’s understanding and support. Ticket holders will receive further information in the coming days via email," said organisers

Ballito Rage has been operating for 19 years and has drawn large groups of 18-year-olds mostly from Gauteng to a week-long party.

Ballito Rage — no vax, no entry and mandatory rapid tests

Matriculants who want to attend this year's Rage Festival must be vaccinated.
News
9 months ago

It’s all systems go for Rage festivals at the coast

It's all systems go for the 2021 Ballito Rage festival, with strict safety measures and protocols in place to avoid a "superspreader" event.
News
7 months ago
Next Article