‘Do they have a fixed address?’ Babita Deokaran murder suspects’ lawyer quizzed 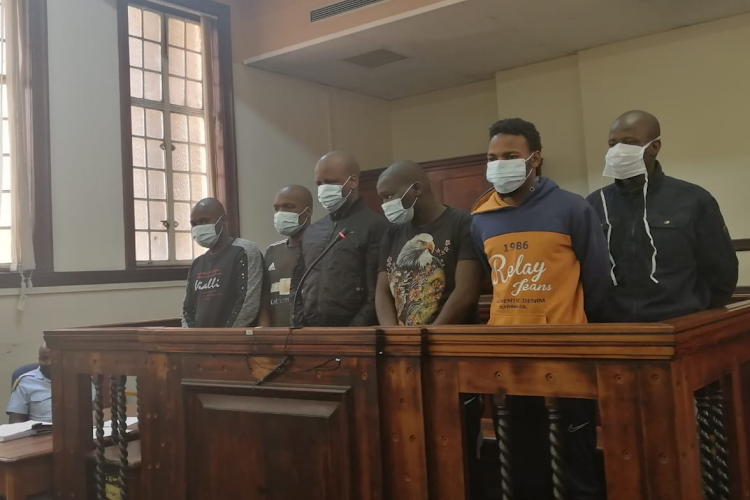 On the day Babita Deokaran should have been celebrating her 53rd birthday, six men accused of killing her appeared in the Johannesburg magistrate’s court, where the state and defence were closing arguments for their bail application.

Phakamani Hadebe, Zitha Radebe, Phinda Ndlovu, Sanele Mbhele, Siphiwe Mazibuko and Siphakanyiswa Dladla are on trial for the murder of Deokaran, who was killed outside her home in the south of Johannesburg in August. She had been instrumental in blowing the whistle on alleged corruption regarding the Gauteng health department’s procurement of Covid-19 personal protective equipment.

Representing the accused, advocate Peter Wilkins told the court the accused should be granted bail because the state’s case is weak and relied heavily on confessions the accused made, allegedly under duress.

“They were tortured and influenced to make those statements,” Wilkins told the court.

A lack of water in the Johannesburg magistrate’s court on Friday led to the postponement of the bail application of six men accused of killing ...
News
7 months ago

“It is three months later but the state has not given us conclusive information about this firearm. This needs to be investigated,” Wilkins said.

The state’s case is filled with circumstantial evidence that is insufficient, he argued.

“The state can’t say who was driving the white vehicle and whether the distinctive white BMW was used in the shooting.”

Earlier, Wilkins told the court the accused were able to demonstrate their emotional ties with their residential address in Rosettenville, where some were arrested.

This triggered magistrate Simon Sibanyoni to question Wilkins about what he meant.

“Have they established ties with Rosettenville? As they had only being staying at this address for a month?” Sibanyoni asked.

Wilkins said the fact that their landlord confirmed they have been staying there proves they have ties with the area.

This prompted Sibanyoni to question Wilkins about how he would describe the Rosettenville address.

Wilkins said: “It is the residential address they use to be able to go to their different work addresses.”

Sibanyoni seemed not entirely convinced by this response. He said if that was the case, there should have been supporting information regarding their places of employment.

Wilkins, however, maintained the employment of the accused was dealt with previously, when it was pointed out they work as taxi marshalls and patrollers in Soweto and Kempton Park.