Steenhuisen warns DA mayors their rule could be short-lived 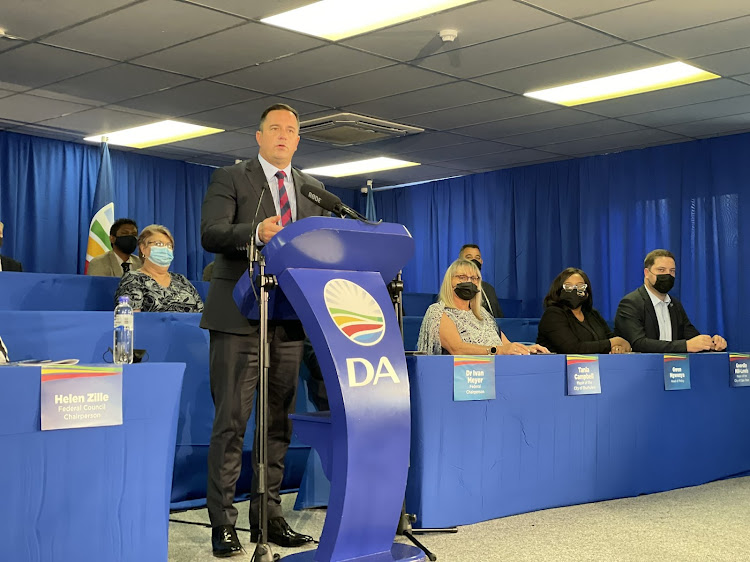 DA leader John Steenhuisen during a press conference on Friday where the party introduced its mayors
Image: SUPPLIED

A refusal to compromise on principles might mean running a short lived government.

This was the message delivered by DA leader John Steenhuisen during a press conference on Friday where the party introduced its newly elected mayors including those leading the trio Gauteng metros – Tshwane, Ekurhuleni and Johannesburg.

Steenhuisen said they would work on having good relationships with partners but warned that minority governments were precarious in their nature.

"We're mindful of the enormous challenge that lie ahead of us particularly in those hung metros where we'll have to establish good relations with parties.

"Having been through similar situations before, we know only too well how precarious minority governments can be. This will however not cause us to compromise on our principles as a party in any way and that refusal to compromise should mean that any of these governments are short lived, we'll spend every single minute in office in service of our people," Steenhuisen said.

He was joined by the DA's 27 mayors including party federal chair Helen Zille during the presser.

Johannesburg mayor Mpho Phalatse said in order to get the city working again, a coalition government needed to be put in place.

The people of Johannesburg did not give the DA a clear majority, therefore the party cannot be expected to exclusively implement its manifesto ...
News
2 months ago

Elected on Monday by 144 votes, Phalatse is well aware of the task ahead .

, Phalatse said the plan was to return the city to back to its status as the economic hub of Africa.

"In order for Johannesburg to work, we need to get it back to the basis. We need to put together a coalition government that will take the city forward.

"I’ve issued a moratorium on the filling of vacancies and extension of contracts. This was done to protect the integrity of the city because without MMCs there are no proper oversight. We need to invest heavily on infrastructure taking into account the increase population.

"The billing system is also an issue and we've received a lot of queries with residents receiving inflated accounts.

"We need to work on reducing these queries because revenue collection is the lifeblood of any municipality," Phalatse said.

Ekurhuleni mayor Tania Campbell said parties had given her the baton in the municipality, adding that the task that lay ahead was a difficult one.

"It will be a difficult one but if I keep it simply and concentrate of what the community needs and not invent  wheel but ensure basic services get to the people it should be easy.

"We will work to ensure that we stick to turnaround times when there’s outages whether it be electricity, water or sewages blockages.

"I’ve been meeting with parties and we’re working together. We won’t let Ekurhuleni works and make sure it won’t go to squalor and ensure our citizens benefit," Campbell said.

City of Cape Town mayor Geordin Hill-Lewis said his government will fight for greater control over the public rail system which he said had failed under Passenger Rail Agency of SA.

Steenhuisen said each mayor would receive the DA’s Ready To Govern guide.

"Our governance unit has been painstaking compiling over several years – and which covers critical parts of the job such as legislation, budgets, appointments and caucus management," he said.

Steenhuisen described the results of the November 1 local government elections as a "watershed" moment where 66 municipalities were hung with no outright winner.

"I think the significance of these developments is yet to fully sink in, and it will require some passage of time and a slightly wider vantage point to truly grasp what we are going through right now.

"In short, the past month has seen our country step off the edge of a quarter of a century of one-party dominance and into a brand new future that is, to borrow that well-worn slogan, “alive with possibilities”.

"We have often spoken of this moment in the past – of a post-ANC South Africa where the liberation movement finally makes way for a healthy and truly multi-party democracy," he said.

In his memo to ActionSA members, the party's national chairperson Michael Beaumont said public criticism of the DA could compromise coalition ...
News
1 month ago

Weakening the ANC by keeping it out of power and leveling the playing field for the EFF had been the reason behind the party’s dramatic but ...
News
1 month ago
Next Article