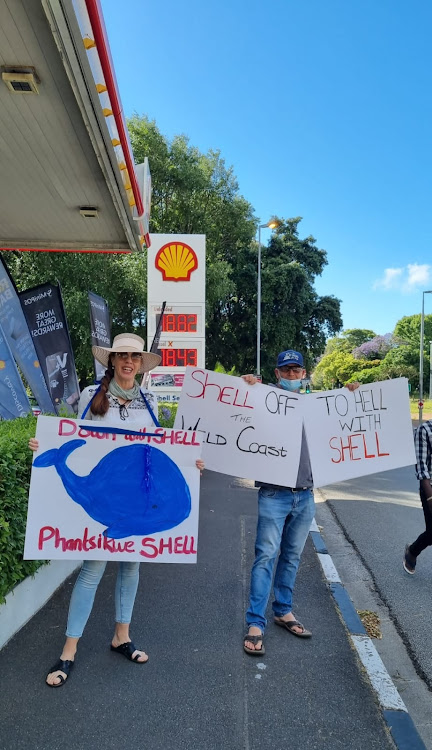 There are growing calls for South Africans to boycott Shell service stations in light of the multinational's seismic survey along the Wild Coast
Image: via Facebook

Protests against Shell’s exploration plan along  the Wild Coast are gaining momentum, with growing calls to boycott the multinational at the pumps.

Shell recently made public its plan to start a seismic survey for oil and gas along SA’s sensitive Wild Coast from December 1, with government approval.

Oceans Not Oil, which describes itself as the public’s voice against offshore oil and gas development, has been driving the campaign.

The week of protests kicked off in Cape Town when the Amazon Warrior, the ship commissioned by Shell to conduct the survey, arrived on Sunday.

Oceans Not Oil says the government’s Operation Phakisa, which focuses on unlocking the economic potential of SA’s oceans, is driving Shell’s exploration.

The department of forestry, fisheries and the environment in a recent statement noted concerns about the seismic surveys to be conducted by Shell and Impact Africa off the coast of SA between December and February 2022.

“The impact of the seismic survey to be undertaken by Shell and Impact Africa has been authorised under the Mineral and Petroleum Resources Development Act (MPRDA) which under section 39(2) of the act requires the submission of an environmental management plan which is to assess and evaluate the environmental impacts of the activity.

Cape Town residents will hit the beach on Sunday in protest against Shell's offshore exploration plan along the Wild Coast.
News
1 week ago

“It should be noted that since the coming into effect of the One Environment System on December 8 2014, the application process for the seismic surveys was finalised. All decisions made under the MPRDA at the time remain valid and binding until set aside by a court of law.”

Concerned South Africans have taken to social media to express their willingness to boycott Shell service stations over the festive season.

“Signing a petition will achieve nothing. Rather, hit them where it hurts most: Stop filling up at all Shell petrol stations! Spread the word,” said one Facebook user.

On Thursday the Youth for Marine Protected Area (YMPA) marched through Durban’s central business district to voice their disdain.

The YMPA’s Njabulo Mdluli told TimesLIVE: “For too long these oil and gas multinationals have been exploiting people and the environment. We have to make our voices heard before it’s too late.

“We want government to act on this. These are valid concerns by people who care for the environment and those who depend on the ocean to put food on their tables.”

The Amadiba community, along the Wild Coast, is also planning a march from Mnyameni Beach in Bizana, in the Eastern Cape, on December 5.

A crisis committee said concerned residents from the KwaZulu-Natal south coast will start their march at the Wild Coast Sun and meet the community at the Mzamba estuary.

“The high-noise blasting of sonar canons under water for ‘seismic testing’ is a direct threat to whales, dolphins, our famous king fish and all kinds of marine life,” it said.

“It is also a threat against the livelihood of communities along the Wild Coast and in KZN that use the riches of the sea to put food on the table and to get an income. This is our ‘ocean’s economy’. It is about food, not about mining the ocean to make profit for the minority rich who think you can eat money.

“Aside of the risk for future oil spill into the sea, if Shell finds oil and gas, drilling in the seabed threatens to bring a host of toxic substances into the water, like mercury, lead, arsenic and barium.

“These toxins are devastating for the health of fish and ocean wildlife as well as all who live on the coast, like we do in Amadiba.”

The crisis committee said “the lives of indigenous people are now under threat as well as the jobs of fishermen.

“For over two decades, the coastal Amadiba community has fought against opencast mining on our land. Now we also must fight against mining of the ocean.

“Indigenous people along the whole coast of Africa must have the right to say no to everything that threatens their livelihood: the right to free prior and informed consent.

“We call upon the SA government to acknowledge the climate crisis. More and more expansion of the fossil fuel economy is not the solution to the economic crisis. You cannot bring about the economic recovery by threatening our livelihoods and the ecology of the ocean.

“You cannot solve one problem by creating a new problem. Put the lives of people before profits. Withdraw the licence given to Shell for preparing mining in the ocean,” the committee said.

Shell recently told the Sunday Times it had followed the consultation process, including a series of face-to-face engagements with interested and affected groups, as well as meetings with provincial environmental authorities and traditional authorities.

It said environmental authorisation from the government was obtained in 2014.

“An environmental compliance audit was undertaken in 2020 by independent specialists to confirm that the controls and mitigation measures ... were still sufficient and valid,” it said.