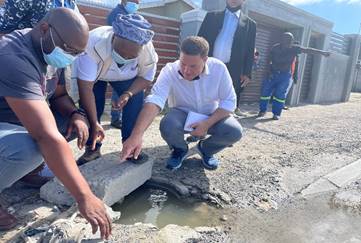 New Cape Town mayor Geordin Hill-Lewis says he is raising a stink about sewage spills in the city.

In a speech to the council on Thursday, Hill-Lewis said he had asked officials for a plan to ensure spills are addressed within 24 to 36 hours, rather than weeks.

“This plan may require additional funding in the [January] adjustments budget for machinery and manpower,” he said.

Hill-Lewis said he also wanted to introduce a reward system for residents who report attempts to damage the sewerage system.

DA keeps Cape Town but with a reduced majority of 58%

It's official: The DA will govern Cape Town for another five years, but with a reduced majority.
News
2 months ago

The new mayor said on his first day in office he visited the Zandvliet wastewater treatment plant and areas in Makhaza, Khayelitsha, and Phoenix, Milnerton, that have been affected by sewage spills.

“I know there are other areas of the city also affected, and in some cases worse than those I visited last week,” he said. “I intend to also visit Wallacedene, Wesbank and Montrose Park in Mitchells Plain.”

Hill-Lewis said there was significant capital investment in new water and sewerage infrastructure but in the meantime sewage spills were not being addressed quickly enough.

“I am very grateful that every spill I have reported this week, and I’ve reported five or six, has been fixed within 24 or 36 hours. This should apply to everyone.”