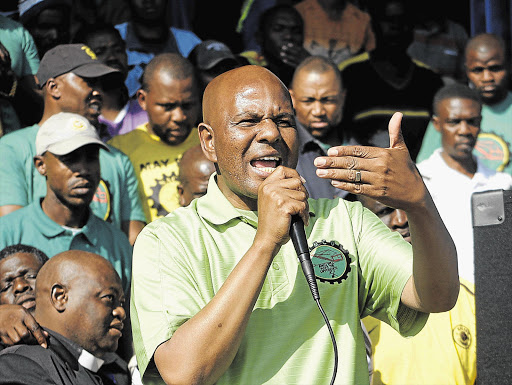 The labour court has set aside the election of Joseph Mathunjwa as president of the Association of Mineworkers and Construction Union (Amcu) at the union’s congress held at the Birchwood Hotel in September 2019.

In his judgment, acting judge Sandile Mabaso on Monday said Mathunjwa’s election was unlawful, unconstitutional and invalid. He said the order setting aside Mathunjwa's election would apply from the date of the judgment.

The union on Thursday said it had lodged an appeal.

“The effect of the lodging of the appeal is that Mr Mathunjwa remains president until the appeal court determines the appeal,” said Krister Janse van Rensburg, head of department of organisational development at Amcu.

The application to set aside Mathunjwa's election was launched by Nkosikho Joni, a former deputy president of the union who was elected at the same conference with Mathunjwa and who was expelled by the union last year.

After his expulsion, Joni approached the labour court for an order declaring that the elections of Mathunjwa and union treasurer-general Jimmy Gama were illegal and should be set aside.

Joni had also sought an order that the resolution dated June 4 2020 removing him from the office of deputy president was unlawful, unconstitutional and invalid. He asked the court to declare that the union had failed to carry out its functions and that it was just and equitable for it to be placed under administration.

Joni contended that the election of Mathunjwa as president was against the provision of the Labour Relations Act and the union's constitution.

Joni argued Mathunjwa was not an employee as defined in the act, as he was not employed in any of the sectors identified in the constitution of Amcu. He said the act defined a trade union as an association of employees and its principal purpose was to regulate relations between employers and employees.

Joni argued that Mathunjwa did not qualify as a member as per the constitution of the union and was accordingly not eligible to be a member and president of Amcu.

Mabaso dismissed other remedies sought by Joni, but ruled in his favour in setting aside Mathunjwa's election.

Janse van Rensburg said Joni was expelled last year as deputy president as well as a member of the union because of "serious misconduct".

He said instead of following the usual course of challenging his dismissal at the bargaining council, Joni approached the labour court with the challenge concerning the lawfulness of Mathunjwa’s election.

“We explained to the court that in terms of our constitution, a member is either employed by the mine ... or a person is an office bearer.”

Janse van Rensburg said the court erroneously agreed with Joni’s interpretation of who was a union member.

“The president and Mr Gama were eligible to be nominated and were democratically elected. What we have decided is to take the judgment on appeal. We welcome that Joni was not reinstated. He has no further recourse in law.”

Has state made amends for Marikana massacre?

Questions on whether the government had done enough to acknowledge its central role and make amends to better the lives of the victims of the 2012 ...
News
3 months ago