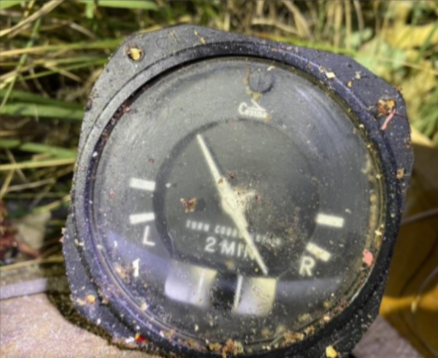 The turn and bank co-ordinator indicator showing the altitude of the aircraft before impact.
Image: South African Civil Aviation Authority

The right wing of a high-performance sport aircraft broke off in midair before it crashed at a farm outside Pretoria East, the SA Civil Aviation Authority has revealed in a preliminary report.

According to the report, pilot Neville Ferreira met the owner of the two-seat Rand KR-2 aircraft at the Kitty Hawk Aerodrome (FAKT) in the Boschkop area, east of Pretoria, on the morning of October 28.

The owner of the aircraft informed investigators that he had approved Ferreira to fly the aircraft. At the time, Ferreira had not flown since October 10 due to his aircraft being under maintenance.

A detailed preflight inspection was conducted with no abnormalities found, the report stated.

The owner told investigators that the aircraft’s fuel tank had about 22-litres of mixed Avgas LL100 and Mogas fuel. About 10 minutes after the preflight inspection, the pilot boarded the aircraft and fastened his safety harness.

“Thereafter, he started the engine and waited until all the indications were within the green arch before taxiing the aircraft to the threshold of Runway 01.

“At about 1020Z [10.20am], the aircraft rolled on the runway in a northerly direction before it rotated and climbed to a height of about 500 feet above ground level (AGL), thereafter made a right turn to the east and then to the south.

“The pilot later made another right turn to the west and flew over the runway towards the aerobatic box area. The aerobatic box limits are from ground up to a minimum of 7,500ft and a maximum of flight level (FL) 090,” said the report.

The preliminary investigation found that:

Training camp with the Genpro

The first eyewitness, who was standing outside the hangar, told investigators that he saw the aircraft entering the aerobatic box area and the pilot executed a few aerobatic-type manoeuvres.

“The pilot did not spend much time in the aerobatic box; he then flew to the south.”

A second eyewitness, who was on a farm, observed the aircraft passing overhead at an estimated height of 500 feet (about 150m) above ground level. The aircraft then made a high-speed left turn, which the investigators assumed was the final approach flight path, during which the right-wing broke off midair.

“The aircraft subsequently entered a high-speed descent towards higher ground with no visible sign of recovery. The aircraft disappeared from the second eyewitness’ line of sight; followed by a loud bang,” the report said.

First Training Camp at Matkópuszta, Hungary this past week.

The witness alerted the police and emergency medical services.

The Aeronautical Rescue and Co-ordination Centre (ARCC) initiated a search and rescue mission. A Squirrel helicopter, dispatched from the Pretoria West SAPS Airwing Unit, located the wreckage at Tierpoort farm, south of the runway.

The helicopter crew located the accident scene and discovered the pilot had succumbed to his injuries.

The report found that the flight lasted about 15 minutes and that the aircraft was destroyed in the accident.

“Examination of the accident scene indicated that the aircraft impacted the ground at high speed in a nose-down left-wing high attitude.

“After impact, the aircraft flipped over, and the pilot safety harness failed and was thrown out of the cockpit about 45m to the far end right of the accident scene. Because the structure of the aircraft is made of mainly wood with foam and composite coverings, substantial disintegration occurred on impact.”

Investigators probing a helicopter crash into the Umgeni River in Durban say a bird strike was to blame.
News
3 months ago
Next Article