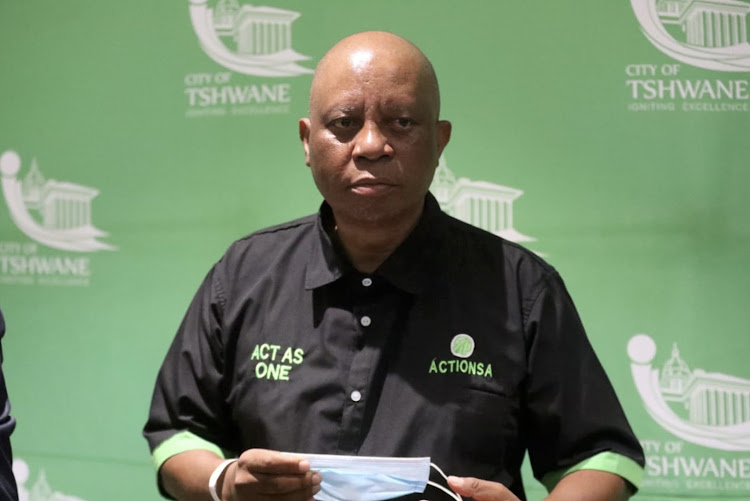 Action SA leader Herman Mashaba during the electoral council meeting in Pretoria on Tuesday. Mashaba warned the DA that his vote was not gift.

ActionSA leader Herman Mashaba on Tuesday said he expects the DA to call him and the EFF for cooperation discussions now that they have helped it secure Gauteng’s hung metros.

Mashaba said they were voting for the DA to prevent seeing the hung metros ending in the hands of the ANC. “One thing I want the DA to really understand is that our vote for them is not a gift,” Mashaba said.

Mashaba, who was in the gallery following the proceedings in Tshwane, which is sitting for the first time since the November 1 local government elections, said he did not trust the DA, which had negotiated with him “in bad faith for two weeks.

“I want them to call us and the EFF because I don’t trust to negotiate with them on my own because I had two weeks of negotiation with them where they negotiated in bad faith, so I don’t want to take another chance with them,” Mashaba said.

He said they were still going to vote for the DA in Tshwane to ensure that the ANC  was not in charge of any of the hung Gauteng metros.

“If the DA really wanted to give these municipalities to the ANC, that’s not gonna happen...  what we started yesterday will continue today,” Mashaba said.

The process of voting for the speaker, mayor and chief whip is expected on Tuesday afternoon as council has wrapped up the swearing in of councillors.

Action SA leader Herman Mashaba yesterday hit out at the DA for labelling him an EFF lackey, a central claim behind its refusal to back him for mayor ...
News
1 week ago

What stood between the ANC and the DA was him pulling out of the mayoral race, said Mashaba.
News
1 week ago
Next Article