Africa must unite and do away with borders: Kenyan president Uhuru Kenyatta in Pretoria 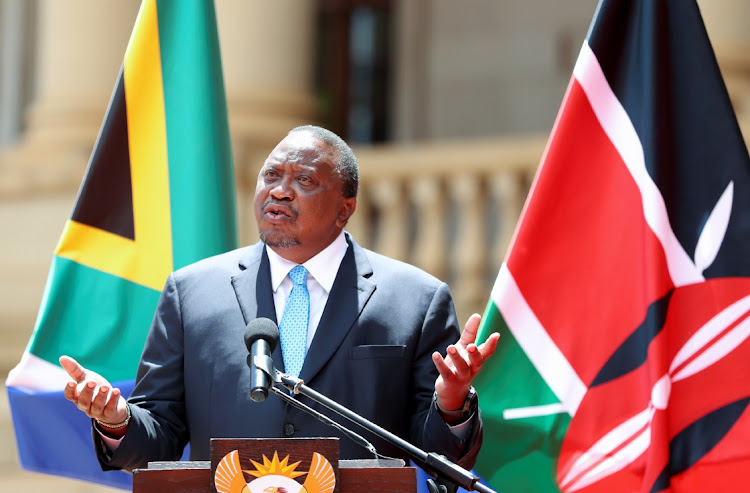 If Africa wants to be a manufacturing giant, it needs to do away with borders.

This was the view of Kenyan president Uhuru Kenyatta on Tuesday afternoon while on a state visit to SA.

“These borders were not made for us. If we are going to be manufacturing giants, we need to do away with these borders,” said Kenyatta, addressing the SA-Kenya Business Forum in Pretoria.

Earlier, at the Union Buildings, Kenyatta and President Cyril Ramaphosa signed a number of agreements and memoranda of understanding in the areas of diplomatic consultations and training, transport and air services, health, tourism, migration and the return of nationals who are refused entry.

Kenyatta is on a state visit until Wednesday.

Addressing political and business leaders, Kenyatta told the gathering: “We need to see the African market as one. We need to be able to develop giants like Airbus which makes components in the United Kingdom, France and other parts of Europe.

His comments were met with applause.

He said he was happy to hear that SAA and Kenya Airways have agreed on a strategic partnership framework towards the creation of a pan-African airline that will draw on the capabilities and advantages of the two airlines. “I am hoping to be one of your first customers,” he said.

Kenyatta said he and Ramaphosa had “fruitful bilateral discussions”.

Ramaphosa said that more than 40 South African companies have invested in the Kenya market in the past two decades. “Altogether these projects have an investment value of R6.84bn and created more than 2,700 jobs in Kenya. SA ranks among the top five investors in Kenya.

“Kenya is SA’s largest trading partner in Africa outside the Southern African Development Community, and SA is the biggest exporter of goods to Kenya on the continent.”

He said the depth and breadth of this trade and investment relationship makes Kenya a key partner for the country in East Africa.

“SA could be a strategic partner in implementing President Kenyatta’s Big Four Agenda, which has a specific focus on manufacturing, food security, universal healthcare and affordable housing. For this to happen, our trade relationship needs to involve greater value-addition, with more focus on manufactured and agricultural goods.”

He added that more needed to be done to achieve greater balance in SA-Kenya bilateral trade, which was heavily skewed in SA’s favour.

“We call on Kenyan companies here today to reach out to their South African counterparts as they search for new markets for their goods and services. African hands must make the goods and provide the services that Africans use. We must correct the distorted trade relationships that exists between African countries and the rest of the world.”

Ramaphosa said African states can no longer be suppliers of raw materials to the world and importers of consumer and capital goods.

He called on governments, investors, entrepreneurs and business leaders from different African countries to come together to explore new partnerships and to reach agreements that drive new trade and investment.

Kenyan President Uhuru Kenyatta praised SA for its 'mature democracy' in the face of the ANC losing power in many parts of the country.
News
1 week ago

President Cyril Ramaphosa announced on Tuesday that SAA and Kenya Airways had agreed on a partnership towards the creation of a pan African airline ...
News
1 week ago
Next Article