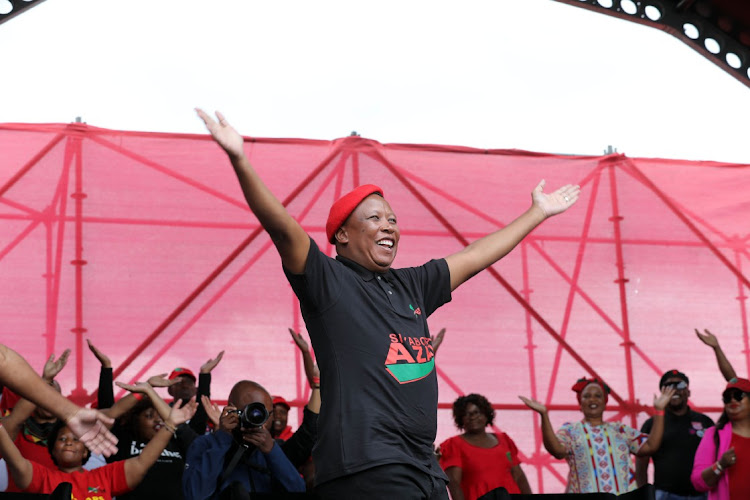 Those who are criticising the EFF for going into coalition talks with the ANC simply do not understand politics.

This is according to EFF leader Julius Malema, who on Saturday defended some of the decisions the party has taken under his leadership.

Among the criticisms Malema singled out was his decision to have tea with former president Jacob Zuma, the call for open borders and the coalition talks with the ANC.

Some in the EFF have blamed some of these decisions for the party's performance falling short of expectations in the 2021 local government elections.

Malema told supporters at the party’s Siyabonga Rally in Thembisa on Saturday that those who believed decisions taken had led to the party’s poor showing must wait until the next elective conference to elect new leaders.

On calls for open borders, Malema said he was prepared to be removed from the EFF leadership in defence of this, saying he would not be part of those calling for foreigners to return home.

He also sought to “educate” those criticising the decision to have coalition talks with the ANC, saying he saw an opportunity that could deliver some of the party’s resolutions with speed.

According to Malema, the party does not want to get into bed with the ANC but, because of the numbers the EFF got in the election, the leaders thought they could use them to get the ANC to agree to pass some of its resolutions, including land expropriation without compensation, free sanitary towels for women and clinics being open on a 24-hour basis.

Malema said the ANC had tried to lure them with positions, but they had stood firm on the demands the party had made before the coalition talks.

Malema has also defended his decision to have tea with former president Jacob Zuma before his incarceration for refusing to appear before the state capture commission of inquiry.

“Others are saying we lost elections because Malema went to drink tea with Zuma. What if that tea is the one that moved us from five to three in KZN in eThekwini?

He said he had gone to Nkandla to tell Zuma that he would be arrested if he remained steadfast in his refusal to appear before the commission of inquiry into state capture.

“I didn’t go there to beg Zuma for anything, I went there to tell Zuma to go to the commission,” he said. — TimesLIVE

Action SA leader Herman Mashaba yesterday hit out at the DA for labelling him an EFF lackey, a central claim behind its refusal to back him for mayor ...
News
8 months ago

The ANC will nominate Mpho Moerane as its mayoral candidate for Johannesburg, the party said on Sunday evening.
News
8 months ago