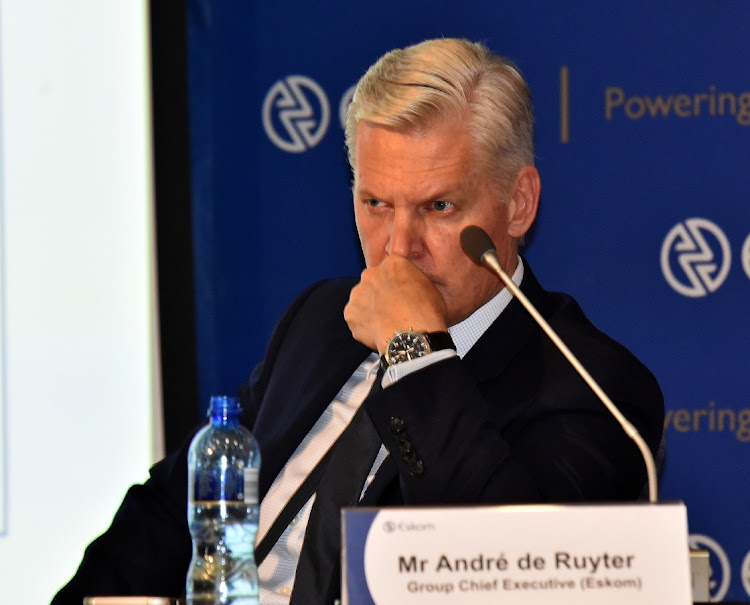 Eskom assets continue taking a beating with causing some units to go down. Power utility CEO Andre de Ruyter said it was becoming more difficult to simply chug the incidents as negligence.

"You would have seen media reports referring to Matimba units 1,2,3. A team had been working on the dry cooling fans that provide cooling to the station.

"This team managed to drop an extension cord onto the unit 2 transformer and flush resulted which tripped the unit station board and shutdown all cooling to units 1,2 and 3.

"We have difficulty in believing this is entirely coincidental and we have dispatched the forensic team to the site to investigate and we'll also be deploying additional security to site in order to ensure we can protect our assets," he said.

De Ruyter said he always tried to avoid attributing faults to sabotage when they could be explained as negligence, however, when three units trip simultaneously, it raised suspicion.

"Similarly, last night, we had a close shave at Lethabo power station [in northern Free State], which is our most reliable station. The coal conveyers supply electricity by two distribution lines coming from Gauteng and are capable of carrying full load, meaning there's double redundancy. At around 6pm on Wednesday, one of the towers collapsed in such a way it fell onto the other line rendering both of them inoperable," he said.

De Ruyter said he wanted to avoid creating an atmosphere of paranoia but there seemed to be pushback from network that had benefitted from criminal network around Eskom.

"We've had a number of arrests, people have had money forfeited to the state and there are quite a number of people not fully behind Eskom cleaning up its operation.

"We’ve been conducting a number of investigations into the transport of coal. We’ve recently discovered a truck in one of our power stations where the truck driver had 60 of these seals in the cab of his truck and this creates the opportunity for tampering of coal quality while en route.

"We’re working against considerable coincidences that could have had much worse impact were it not for good response by the Eskom team," he said.

Speaking at the daily briefing, De Ruyter announced that load shedding would be lifted at 9pm on Thursday before moving to stage 1 on from 5am on Friday.

"We have a total of 13991MW load losses and this is very high. If our units return, we should be fine in terms of lifting load shedding tonight but that remains to be seen," De Ruyter said.

The R161bn Kusile Power station in Mpumalanga has been hit by regular coal and water leaks, which often lead to plants being shut down and ...
News
2 months ago

On Wednesday, De Ruyter said risk could materialise as a result of the constraint on capacity of energy generation.
News
2 months ago

State power utility Eskom is on track to split its generation and transmission divisions by the end of the year, although some government and ...
News
2 months ago
Next Article