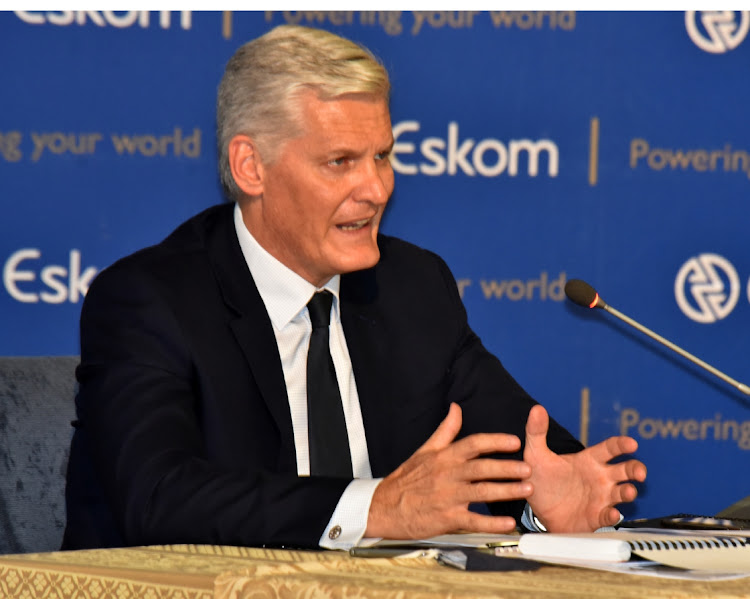 Eskom CEO Andre de Ruyter has warned of the risk of load-shedding.

On Wednesday, De Ruyter said risk could materialise as a result of the constraint on capacity of energy generation.

Speaking at a media briefing, he said Eskom had experienced a total of 14444MW load losses as a result of planned and unplanned losses.

"If we lose any more load losses the risk of load-shedding will materialise," he said.

"Yesterday we had two boiler tube leaks at Kusile and Majuba. These are large units and crucial. Last night we issued an alert of risk of load-shedding but we didn't load shed, which speaks to how the system is tightly balanced.

"This morning we managed to return Kriel unit 2 to service, but Medupe unit 3 tripped but we expect it to be back by evening.

"We also lost another unit this morning and at this point in time we don’t have a forecast of return," he said.

Speaking on the constant breakdowns, De Ruyter said he was disappointed that some of the newer plants such as Kusile were not delivering as expected.

De Ruyter said suggestions that he was being afforded space to conduct maintenance that his predecessors were not, would give the assertion the lack of maintenance had been deliberate.

The perennial power disruptions euphemistically referred to as load-shedding, are a threat to SA’s prospects for socio-economic recovery which ...
Opinion
2 months ago

Enough is enough with power cuts

When it comes to electricity blackouts, we as citizens are forced to accept an unacceptable situation. We are also bullied to accept that ...
Opinion
2 months ago
Next Article