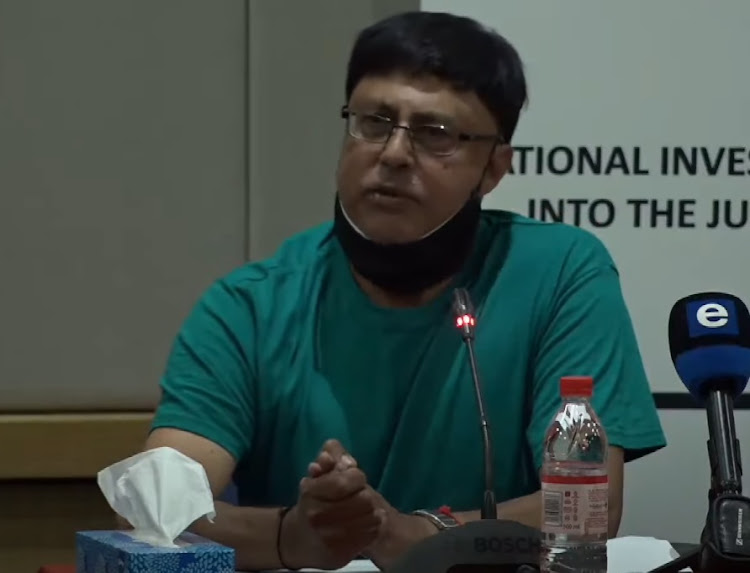 A member of the neighbourhood watch groups which took over the streets of Phoenix, northern Durban, during the July 12 riots has blamed drug lords and criminal syndicates for the killings of alleged looters.

Sham Maharaj took the stand on the second day of the SA Human Rights Commission’s (SAHRC) national investigative hearings on the events that followed the looting that started in KwaZulu-Natal and spilled over to Gauteng after former president Jacob Zuma’s incarceration.

The inquisitorial investigation is aimed at probing the reasons behind the violence that took place, the allegations of racial attacks leveled against the Indian communities in the affected areas as well as the human rights implications of what had taken place.

Around 36 people are estimated to have been killed in Phoenix alone when neighbourhood watch groups and security companies took the law into their own hands as they targeted those they considered to have visited the area for looting.

Maharaj said overwhelmed police who were outnumbered during the looting and decided to stand aside had worsened the situation in the area.

He said he and other concerned members had taken to the streets as looting took place near their homes as they feared that this would also spread to their houses.

The backlash against the DA’s controversial “racists v heroes” election posters gained momentum on Wednesday with families of the victims of the ...
News
3 months ago

“During the time of the violence, I think everybody was just too scared about what was going to happen to them. Social media and the rumours that went around really put the fear into everyone. So, there were literally hundreds of neighbourhood watch groups in Phoenix that came up to protect their families and property and I was one of them,” he said.

He said while he and his neighbours of around 50 had not been armed, some people in the area had set up roadblocks where people were killed, including vigilantes and security guards, some unregistered.

“There were roadblocks set up by different people. These are security companies, drug lords, shebeen [operators] and criminal elements that had infiltrated residents of that area. They were armed and were located at the entrances and exits of Phoenix,” he said.

Maharaj said he personally knew that some of the affected businesses, including bottle stores, had been run as fronts for drug dens.

He said the killings, maiming and burning of those who were allegedly racially profiled and accused of wanting to loot had affected racial relations in the areas. Maharaj said because of that pupils from the nearby townships, including Inanda, had refused to go back to their schools as they were afraid after the rumours that they would be poisoned through the  school feeding schemes.

The DA's decision to remove its "racist vs heroes" campaign posters will not shield the party from the consequences of its divisive messaging, says ...
News
3 months ago

Maharaj was, however, grilled by evidence leader and SAHRC Gauteng manager Buang Jones over his accusations against the media. Maharaj had said the media was spreading misinformation and negative perceptions about Phoenix in terms of how it reported the killings.

"What is of concern to me is your lack of concern for the families who had lost their loved ones who were indiscriminately killed during the unrest in Phoenix," Jones said.

Jones also questioned Maharaj on why he did not think the killing of 36 people in the area constituted a massacre.

He said he and others had formed Phoenix Ubuntu Forum as part of trying to calm temperatures, provide social assistance to those who had been affected by the violence and looting and build social cohesion.

“We had built relations with people in Bhambayi, KwaMashu, Inanda and so on, and in one week in July this relationship got destroyed. That trust was broken,” he said.

Community activist Roshan Jainath had testified on the first day of the hearings that while not all the police officers in the areas that had been affected by the violence, the SA Police Service (SAPS) had been infested by rogue elements. He said SAPS in some areas, including in Pietermaritzburg, had colluded with rogue security companies and neighborhood watch in aiding the attacks and ignoring the abuses.