Emergency services workers had to attend to the injured after violence broke out when people occupying land illegally were evicted in Pretoria.
Image: Keletso Mkhwanazi

Dozens of properties were destroyed in Soshanguve, north of Pretoria, after they had been built on illegally occupied land, sparking violent protests.

Several roads in the area were barricaded with stones and burning tyres while passing vehicles were stoned and some were even set on fire on Tuesday.

When Sowetan arrived at the scene, four vehicles including a Mercedes sedan and a truck belonging to a security company were among those burnt by protesters who had just been evicted.

Tebogo Ledwaba was among those left to salvage their belongings after their 5-roomed house was demolished by a private security company when the landowner was granted an eviction order.

Ledwaba told Sowetan that her family moved to Soshanguve in August after having built their house on land they bought with more than 100 other people in the area.

“I do not have a place to sleep, I am five months pregnant, with three children and I am currently unemployed,” said Ledwaba.

She claims they were removed without notice. “We were supposed to be given a month's notice but we were forcefully removed,” she said. 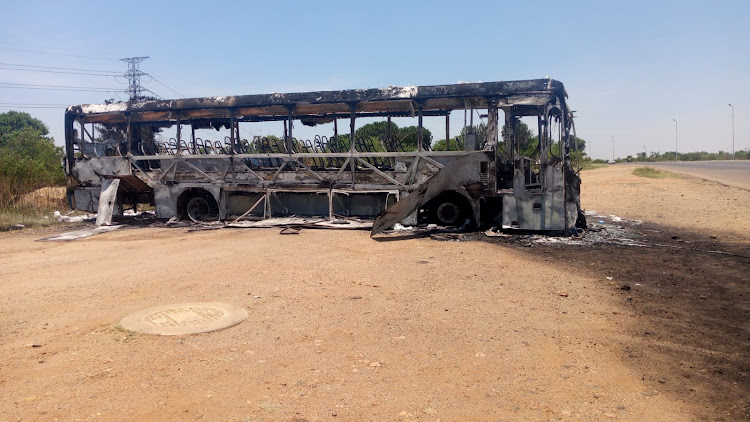 She said her husband, Alpheus, got hurt during the forced evictions which started around 6am. “When we tried getting things from the house, the officials opened fire and my husband got shot by a rubber bullet,” said Ledwaba.

She said they are now left with no clothes to change.

“All my furniture was taken, two beds, set of couches, display cabinet, kitchen units and two wardrobes were taken by the officials,” said Ledwaba.

Ledwaba said her family has spent more than R200,000 for new furniture, building materials and labour for their home which was brought to the ground in a couple of minutes.

“The people who we bought land from are nowhere to be found now, they all ran away as soon as they saw the Red Ants approaching our area,” said Ledwaba.

Andries Tabane from Hebron, who was also a resident in the area, said he has lost everything.

He said that he had recently bought the land for R80,000 and spent over R70,000 for his house which was also brought to ground. “I came here to build a legacy for my children, now my dreams are in vain,” Tabane said.

He said it feels like someone will wake him from a bad dream. He said with the help of his nephew they used up all his savings to help him build a home for them and now they have lost everything.

“He was transported to Steve Biko Academic Hospital. Another male patient who was allegedly stabbed by a protester as he was forcing his way up the road was rushed to George Mukhari Hospital for his injury.”

Other law enforcement at the scene included members of the SAPS and TMPD keeping a presence.

Nightmare tenants refuse to vacate after property is sold

A lecturer’s joy at buying a new home for his family has slowly turned into a nightmare as tenants of the previous owner refuse to vacate the ...
News
1 month ago

Thandi Johnson is in deep emotional anguish after seeing her life’s work destroyed by the looting that ravaged her store in Diepkloof, Soweto, last ...
News
4 months ago
Next Article