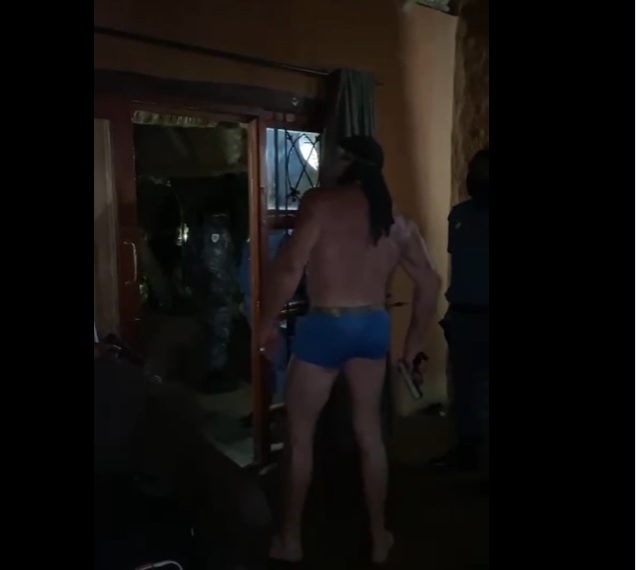 The Independent Police Investigative Directorate (Ipid) has launched an investigation into an incident at the weekend in which a police officer shot a man in the head.

The man is under police guard in hospital.

In a viral video doing the rounds on social media, a man can be seen getting dressed as officers stand by.  SowetanLIVE's sister publication TimesLIVE has confirmed the authenticity of the video with both SAPS and Ipid.

The man then walks into the room and asks a woman: “Where is my gun?”

An officer in the room tells the man: “Now you are playing dangerous.”

“Who is playing dangerous? You f**cking coward,” he tells an officer standing at the door of the room as he cocks the firearm.

“Come on, you f**cking asshole. The problem is I know how to use this thing,” he tells the officer, while showing him the gun.

The woman in the room can be heard shouting: “Guys, you are supposed to protect us, really.”

The gunman then instructs the officers to leave his premises.

“I’m not asking you if or when or what. Take that gun, shoot me, shoot me,” he shouts at the officer while forcing her firearm out of her hands.

A male officer in the room then pulls out his firearm and fires one shot at the man.

He collapses to the ground as a screaming woman shouts that the man is "dead".

Ipid spokesperson Grace Langa said the incident happened at Misty Hill Lodge in Muldersdrift on the West Rand just after midnight on Saturday.

“The manager asked the guest to leave, saying  the lodge would refund him, [but] he refused. The security and manager followed him to his room and requested him to leave, then he became more aggressive.

“Police officers were called to assist. When the police arrived the guest started fighting with them. He took a firearm out of the bed drawer and cocked it. One bullet fell down, and it is alleged the victim disarmed one police officer of his firearm.”

He was shot in the head and taken to hospital under police guard. By 6pm on Monday, the man was still alive and being treated in hospital.

“The allegation is that the wife of the victim was present when it all happened,” Langa said.

TimesLIVE reached out to the lodge on Monday evening, but was told to make contact on Tuesday morning when managers were on duty.

The Independent Police Investigative Directive is probing an incident where a Mpumalanga police officer allegedly shot a man at a tavern then dumped ...
News
7 months ago

The four police officers accused of murdering Mthokozisi Ntumba during a student protest in Braamfontein, Johannesburg, shared a common purpose when ...
News
7 months ago
Next Article