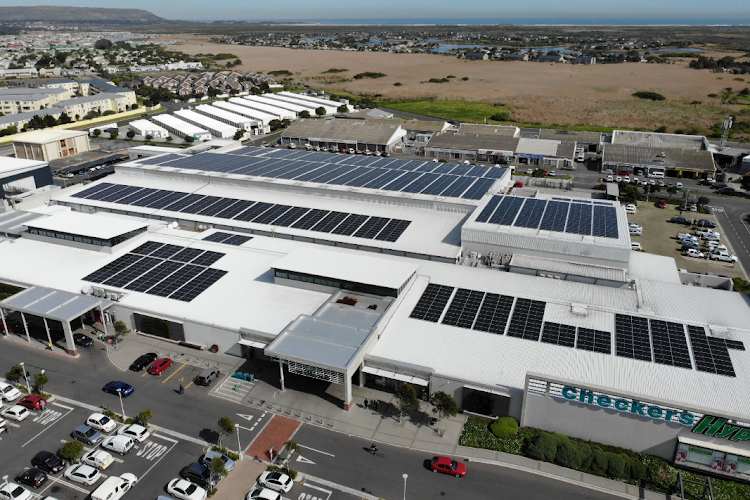 Shoprite Sun Valley is among the stores where the group has adopted solar energy to manage its electricity costs, which approach R3bn a year.
Image: Shoprite

The Shoprite group said it added 22 new solar photovoltaic (PV) sites between February and September, more than doubling its solar capacity. It aims to power 25% of its operations with renewable energy over the next five years.

“The new solar PV installations represent a 138% increase to 29,280MWh per year. This output, generated by solar panels spread across the equivalent of 14 rugby fields, could power 2,674 households for a year, thus easing the pressure on the national grid.”

Woolworths said this week it is trialling electric panel vans on its online shopping delivery fleet, “in line with our vision to be one of the most sustainable retailers in the world”.

In the last two months, Woolworths said it has saved nearly 3,600kg of CO2 emissions.

Shoprite said it now has a total of 41 solar PV installations: two at distribution centres in Basson and Centurion, 38 in supermarkets in SA and Namibia, as well as in a parking lot at its home office.

“This is in line with the group’s strategy to mitigate climate change, in which solar PV rollout and procurement, including a significant number of solar-powered refrigerated trucks and trailers, plays a significant role,” the retailer said.

Those who insinuate that Andre de Ruyter should resign as Eskom CEO are wrong. They are barking up the wrong tree.
Opinion
2 months ago

Eskom engineers are on standby to switch off municipalities and industrial customers not complying with the loadshedding directive.
News
2 months ago
Next Article