Five gang suspects arrested ‘on their way to commit robbery’ 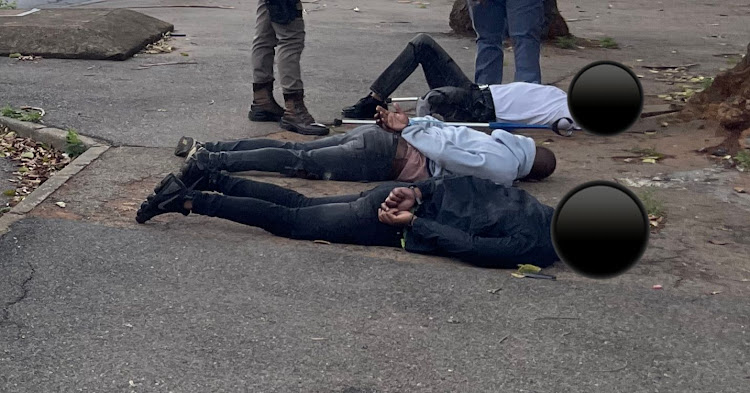 The five suspects are charged with conspiracy to commit robbery, possession of unlicensed firearms and ammunition among other crimes.
Image: Supplied:SAPS

Five suspected gang members were arrested on Monday in Bedfordview, east of Johannesburg, while on their way to allegedly commit robbery, police said.

The suspects are charged with conspiracy to commit robbery, possession of unlicensed firearms and ammunition among other crimes.

Police spokesperson Mavela Masondo said one suspect is linked to a cash-in-transit robbery that occurred in July this year at a mall in Pretoria.

According to police, three firearms and two high-performance cars fitted with false number plates were impounded after the gang was cornered by police.

House robbers 'torture' elderly woman with a blowtorch in Bronkhorstspruit.
News
6 months ago

Masondo said a VW GTI Golf 5 and Toyota Hilux that matched the description given were spotted travelling in the direction of Bedfordview.

“Both vehicles were stopped and a search was conducted. Three unlicensed firearms loaded with ammunition were found, together with balaclavas, reflective jackets, two-way radios, hand gloves, a grinder and other tools. It was revealed that the cars are fitted with false registration plates,” he said.

Masondo said the cars used by the suspects were impounded for further investigation.

Gauteng police commissioner Lt-Gen Elias Mawela commended the team which he said was working hard to foil robberies in Gauteng.

“I am so proud of this multidisciplinary, hardworking team that continues to save lives of innocent people that were going to be victims of crime perpetrated by the arrested suspects. The excellent work performed by this team does not go unnoticed, especially this time of the year when criminals think they can do as they wish. Criminals must know that whatever they are planning this festive season will never materialise as we have this team waiting for them,” said Mawela.