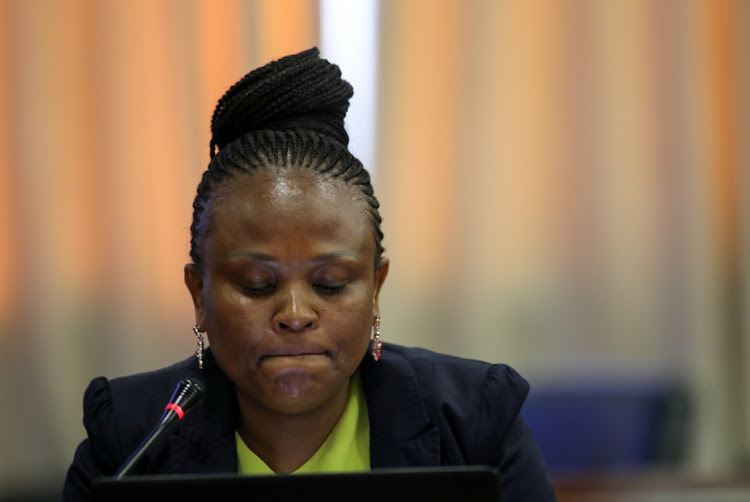 Arguments on whether legal representatives should have been allowed at the parliamentary impeachment hearing for public protector Busisiwe Mkhwebane took centre stage on Monday. File photo.
Image: Esa Alexander/Sunday Times

When a public protector is impeached, it is not punitive in the same way as when the president is impeached. This is why it is rational for parliament not to allow her lawyers to participate in impeachment proceedings, the speaker argued before the Constitutional Court on Monday.

Public protector Busisiwe Mkhwebane faces impeachment on grounds of alleged misconduct and incompetence — based on a number of judgments in which she was heavily criticised by the courts. One was a Constitutional Court judgment in which she was held personally liable for the costs because she had been dishonest in how she had conducted the litigation.

The Constitutional Court was hearing an appeal against a Western Cape High Court decision that found unconstitutional two aspects of the newly developed rules for the impeachment of the public protector (and other heads of Chapter Nine institutions).

The judgment has stalled an impeachment process that had already got under way and, if it stands, will mean parliament would likely have to start the whole process from scratch.

A case of contempt has been opened by the public protector's office against the speaker of Dr JS Moroka Local Municipality in Mpumalanga, Dipuo ...
News
9 months ago

One of the grounds of unconstitutionality found by the high court was that, under the rules to impeach the heads of Chapter Nine institutions, lawyers may be present at parliament’s impeachment investigation and they may assist — but they may not participate. This is in contrast to the process for the impeachment of the president and for judges.

Counsel for the speaker, Andrew Breitenbach SC, argued that when a president is impeached it is punitive and the consequences are severe, including prohibiting him from serving any public office in the future and losing all his benefits. This is not the case with the public protector, he said.

He said the purpose of excluding lawyers was to make the heads of Chapter Nine institutions “personally accountable”.

“Parliament wishes to hear from her,” he said.

Breitenbach faced a number of questions from the bench on this. Justice Stevan Majiedt said he had “concerns” about the exclusion of lawyers, given that there may be times when the grounds of impeachment involved disputes of fact, which would require the evidence of witnesses and cross-examination.

Justice Zukisa Tshiqi suggested that, while a public protector may have legal qualifications, other Chapter Nine heads may not. Acting justice Owen Rogers probed Breitenbach on how it achieved greater personal accountability to prohibit legal representation, when the public protector would still, even with legal representation, be required to be present and answer questions from MPs.

Breitenbach argued that while it may be that members of the court might have drafted the rules differently, that was not enough to find them unconstitutional on the basis of irrationality. For the court to find irrationality in law, there must be no rational connection at all between the rule and its purpose.

Otherwise, the court would be trespassing on to the terrain of parliament and breaching the separation of powers, he argued.

But Dali Mpofu SC, counsel for Mkhwebane, said that the speaker’s appeal on this score “must fail completely,” arguing that the differentiation between the heads of Chapter Nine institutions and others  was the “height of irrationality” and adding that Breitenbach had not addressed why judges were entitled to legal representation.

If the legal representation aspect of the rules were to be found unconstitutional, the impeachment process against Mkhwebane would still be able to go ahead — because, though the process had begun, it had not gotten to the point where she was to appear before a parliamentary committee.

In this case, there had already been a panel, chaired by retired ConCourt justice Bess Nkabinde. Counsel for the DA, Steven Budlender SC, argued that the high court was wrong and there was nothing unconstitutional in allowing judges to be part of the panel. But he said even if the ConCourt were to agree with the high court, its order should be forward-looking only; and so not force parliament to begin again from scratch as there would be no prejudice to Mkhwebane.

“It cannot be said that Ms Mkhwebane was prejudiced by having a retired judge on her panel. If anything, she benefited from it,” he said.

But Mpofu argued that judges should have no role in the removal of a public protector — a role that the constitution reserves for parliament.

In the high court, Mkhwebane had challenged a number of other aspects of the rules, which the high court found passed muster. At the Constitutional Court, Mpofu also argued that if the highest court granted leave to the DA and the speaker to appeal directly, it should also allow Mkhwebane to cross-appeal and relook at all her original grounds for challenging the constitutionality of the rules.

The Western Cape high court has found that sections of parliament’s impeachment rules are unconstitutional - in a judgment that has cast doubt on the ...
News
11 months ago

The Constitutional Court has dismissed public protector Busisiwe Mkhwebane's application for leave to appeal against a Western Cape High Court ...
News
1 year ago
Next Article