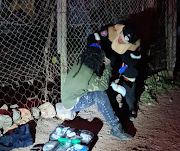 A Paarl resident risked his life on Friday to save a baby in a burning house, sustaining severe burn wounds in the process.

According to NPO Drakenstein Farm Watch (DFW), a firefighter and medical rescue group in Amstelhof in the Western Cape, the fire was caused by a candle falling over just before midnight.

The area was load shedding at the time.

DFW received a call from security group Fidelity ADT about a structural fire. When volunteers arrived the flames were already metres high.

Before the teams arrived, local resident Werner Arendse rushed through the flames to save a baby trapped in the house, risking his life and sustaining severe burns.

“Although successful and very brave, he burnt his hand badly, later to be treated for burn wounds by DFW firefighter and advanced first aider. The baby was fine,” DFW reported.

“Our thoughts are with the families who lost all, and we wish the injured a speedy recovery,” the NPO said.