Small parties to the fore in hung municipalities 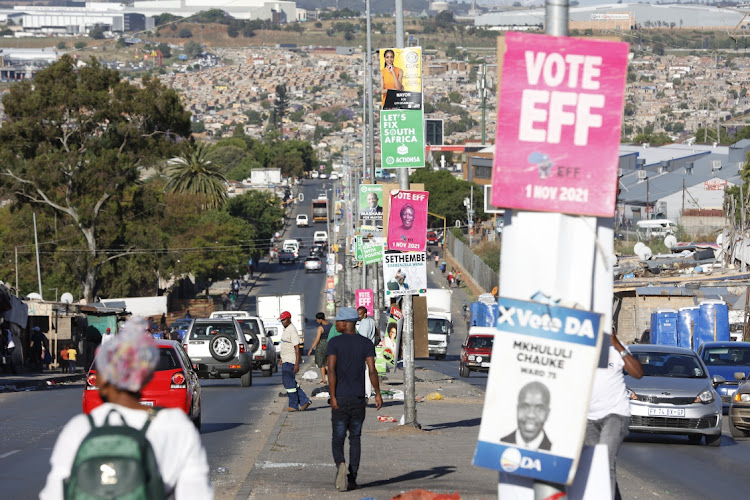 Campaign posters from political parties in Alexandra, northern Johannesburg, did not help much during the local municipal elections as voter turnout was very low.
Image: Thulani Mbele

Smaller political parties who hold sway over who gets to govern hung municipalities across the country, including the sought-after metros, are gearing up for the ride of their lives.

The power brokers and kingmakers – some whom were wallowing in political obscurity for years – have emerged as the biggest winners of this local government elections.

After the ballots were tallied on Thursday it emerged the two biggest parties, the ANC and the DA, will need the backing of several smaller parties to govern in more than two dozen councils, including in five metros.

The parties whose backing will be sought after include the EFF, ActionSA, IFP, Patriotic Alliance, ACDP, FF Plus and other regional parties. Their participation in bigger metros including Joburg, Tshwane, Nelson Mandela Bay and eThekwini has never been so crucial.

Only three metros were won outright: the DA retained the City of Cape Town, while the ANC retained Buffalo City and Mangaung.

In Tshwane the ANC secured 75 of the 214 seats in the council and needs 33 seats to secure a clear majority while the DA needs 38 seats after it amassed 69 seats.

The DA was in pole position to form a coalition government in the capital city as both ActionSA and the FF Plus, with their combined 36 seats, have ruled out working with the ANC.  If it gets both ActionSA and FF Plus on board it will need just two seats.

ACDP leader Kenneth Meshoe said his party, which had two seats, would also back a DA-led coalition.

“We have not had formal talks yet but we are planning to work with the DA if we are going to be part of coalitions, including in Tshwane,” Meshoe said on Thursday.

While the EFF was open to working with the ANC, its 23 seats would not help it form a government, which would require further lobbying of a number of smaller parties that secured one seat each in council, including the African Independent Congress (AIC), COPE, Patriotic Alliance, and Defenders of People (DOP).

The Patriotic Alliance’s 2.9% support in Joburg, which translates to eight seats; 1.8% in Ekurhuleni, bagging four seats; and 1.3% in Nelson Mandela Bay can give both the ANC and DA’s chances of governing these three metros a big boost.

In Johannesburg, of the 270 council seats, the ANC secured 91 and needed 45 more seats, while the DA won 71 seats.

The economic hub’s council was up for intense political lobbying as it had ended with a number of kingmakers, with ActionSA having secured 44 seats, the EFF 29 seats while the Patriotic Alliance and the IFP increased their seats to eight and seven respectively.

The FF Plus secured four seats, while both the ACDP and Al Jama-ah received three seats each. Eight other political parties secured one seat each in the council, including Good, the African People's Convention (APC), PAC and the ATM, which were not in council previously.

FF Plus head of elections Wouter Wessels has already indicated that it was not willing to even engage in coalition talks with the ANC.

'You cannot all be winners in a coalition'

Political parties preparing for coalition negotiations have been warned to enter into talks with the right motives to prevent unstable councils ...
News
1 month ago

In Ekurhuleni, the support for both the ANC and DA has dropped in these elections with Luthuli House securing only 38.1% support, which translates to 86 seats, and the DA pulling in 28.7% of the vote (65 seats).

The ANC needs a further 23 seats to cross the line while the DA is short of 47 seats in the council that has a total of 224 seats.

The EFF has 31 seats and Herman Mashaba’s ActionSA holds 15 seats with the FF Plus having eight. The Patriotic Alliance won four seats while the IFP and IAC each have three seats and the ACDP two.

The underdogs IRASA (Independent Ratepayers Association of SA), Independent Citizens Movement (ICM) and PAC each have one seat.

The best possible scenario for the ANC would be to convince Julius Malema’s red berets to back it with  their 31 seats, which would shoot the ANC past the 112 majority mark.

In 2016, the ANC had 107 seats in Ekurhuleni and could govern without speaking to both the DA and EFF but this time around it needs more seats with the EFF emerging as the strongest kingmaker.

With a total of 222 seats in the eThekwini council in KwaZulu-Natal, the ANC secured 96 seats and needed 16 more to retain the metro through a coalition government, while the DA secured 58 seats as the second- biggest party in council.

The EFF and the IFP have emerged as clear kingmakers in the metro with 24 and 16 seats respectively.

In the Nelson Mandela Bay metro in Gqeberha, smaller parties have already indicated what they want from the ANC and the DA to hand over power to them as both parties failed to secure the 61 seats needed to run the metro.

The DA and ANC both got 48 seats while the EFF got eight seats.

Kingmakers in Nelson Mandela Bay include the Northern Alliance (NA) with three seats, ACDP, Defenders of the People and FF Plus – all with two seats – while Abantu Integrity Movement (AIM) has one seat.

In Emfuleni local municipality in Gauteng, the ANC needs seven seats to achieve the 45-seat majority. The same situation is also unfolding in the Rustenburg municipality where the ruling party needs two more seats to regain power in one of SA's fastest growing cities.

EFF leader Julius Malema on Thursday said the red berets wanted to make trade-offs with parties where they would possibly lead certain municipalities, in exchange for support in another municipality.

Gauteng's trio jewel metros look set to be governed by coalition governments again if early election results are anything to go by.
News
1 month ago

Vuwani residents vote for ANC after a 10-year boycott

Residents of Vuwani in Limpopo, who boycotted voting in municipal elections in 2016 over demarcation issues, have overwhelmingly voted for the ANC ...
News
1 month ago

Majority of metros to end up with hung councils

Despite the Electoral Commission’s stated ambition to finalise 90% of the results before Tuesday midnight, only 66 % of counting had been captured ...
News
1 month ago
Next Article