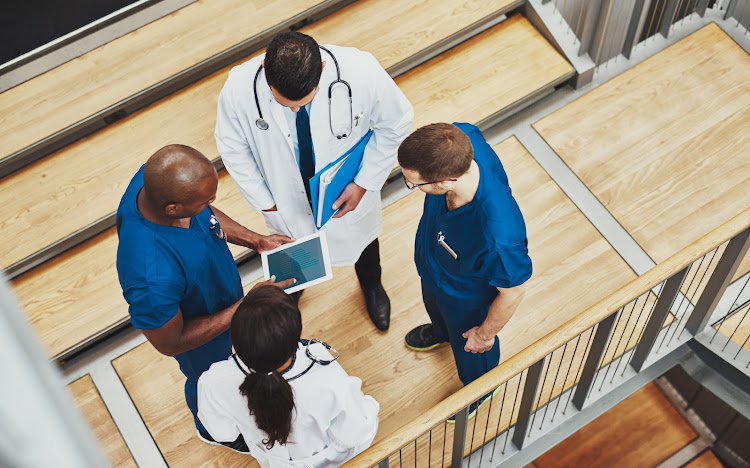 SA's healthcare professionals want the government to review their culpability when it comes to patient deaths arising from their errors.
Image: 123RF/Langstrup

SA doctors have united in their call to urge government to initiate a review into the country’s culpable homicide law and its application in a healthcare setting.

In a letter to justice minister Ronald Lamola, the coalition of nine healthcare bodies said there is “a very low threshold in South African law for blameworthiness when a patient dies while under medical care, which has resulted in errors of judgment in complex healthcare environments being criminalised and healthcare professionals being convicted regardless of their intent”.

The joint letter calls for the review to be carried out by the SA Law Reform Commission (SALRC) due to the complexity of criminal law in a healthcare setting and the importance of achieving a long-term solution for healthcare professionals and patients.

The letter stated: “It is hard to see who benefits from the current system. As well as families losing a loved one through tragic circumstances, doctors risk losing their careers and liberty, and the fear of criminal charges has a negative knock-on effect on patient care.

“The system stands in the way of patients receiving an early apology and a full explanation of events, and thereby denies closure.

“A recent survey of more than 500 doctors conducted by the MPS showed that almost nine in 10 (88%) are concerned about facing an investigation following an adverse patient outcome during their career, and 90% think the prospect of facing criminal investigation or charges impacts on their mental health.

“The survey also revealed that the prospect of criminal investigation means nearly one in two doctors in SA have considered leaving the profession. The reality of healthcare provision is that complications occur despite best intentions and care.

“This overwhelming response, across all specialties and regions, illustrates how widespread fear and concern is for doctors in the current climate in SA. Concerningly, four in five doctors surveyed think the criminal justice system has an inadequate understanding of medical practice.”

The letter states a  long-term solution is needed in terms of the wider problem of how criminal law is applied to healthcare practice.

Healthcare professionals need to be held accountable. However, criminalising errors of judgment — particularly in this fast-moving and complex healthcare environment — seems unreasonably severe

“This is why we are calling on government to involve the SALRC in a review into the threshold for criminal charges brought against doctors acting in good faith when delivering healthcare.

“Healthcare professionals need to be held accountable. However, criminalising errors of judgment — particularly in this fast-moving and complex healthcare environment — seems unreasonably severe.

“Criminalisation in the absence of any clear intention to cause harm is overly punitive, leaving healthcare professionals vulnerable to criminal charges.

“Lessons can be learned from other jurisdictions. For example, in Scotland, charges are only brought against doctors if an act is proved to be intentional, reckless or grossly careless.

“Our organisations are committed to the highest level of safety for all patients in SA.

“This will, however, require replacing the current culture of blame and fear with one of learning, where healthcare professionals feel able to apologise and learn from mistakes, which will help to reduce the number of errors and thus enable progress on improving patient safety.

“When healthcare professionals are allowed and supported to learn from mistakes, lessons are learnt and patients are better protected in the future.

“We appreciate the intricacy of these issues, and while they are difficult to resolve, their complexity only highlights how important it is that our healthcare workers have clarity from their leaders, and ultimately in law.

“Patients and clinicians want the same thing: for those in need to receive the best care.”

Government spokesperson Thabo Masebe yesterday said it had not been established that Gosiame Sithole, the woman alleged to have given birth to the ...
News
10 months ago

Negligence lies at the heart of traumatic state of hospitals, says Vavi

The SA Federation of Trade Unions (Saftu) has condemned the rise in the number of hospital horrors emanating from medical negligence in the country.
News
1 year ago

"We need only  the truth as to what happened,  but we also need to make sure we support the family and offer counselling to the young mother and the ...
News
1 year ago
Next Article