“It's not time to sweep things under the carpet,” Democratic Independent leader Anwar Adams shouted as he disrupted proceedings. 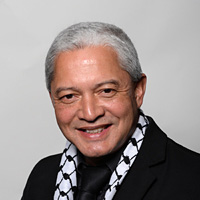 Cape Town mayor-elect Geordin Hill-Lewis had his thunder stolen by a ranting former Cape Town councillor who disrupted the IEC's final press briefing, bringing to an abrupt end the proceedings on Wednesday afternoon.

Adams also directed his anger at Hendrickse, calling him “a puppet”.

Standing at the back with about five associates, Adams heckled Hendrickse. About 10 minutes into the press conference he began ranting incessantly.

“We've got serious allegations out there,” he shouted “It's not time to sweep things under the carpet.”

Adams claimed the Western Cape elections were rigged, unfair and that the code of conduct was violated by various political parties.

He also claimed it was unfair of the IEC to close the results centre before they provided answers, or to respond to the party's allegations.

“We need answers today,” he demanded.

The uproar forced the adjournment of events and the IEC played the national anthem to close the proceedings. This did not stop Adams and his associates from shouting over the anthem, calling for, among other things, the Palestinian national anthem.

Before he was interrupted, Hendrickse announced that all municipalities in the province had been finalised with the exception of the City of Cape Town.

He said they expected to finalise the metro's results by Wednesday night.

The Western Cape has 30 municipalities, of which five are district councils. Only nine of the councils had a clear majority and 15 were hung councils.

The five district councils will know their final results by the end of the month when local councils have elected their representatives.

Only eight of its municipalities were hung in 2016.