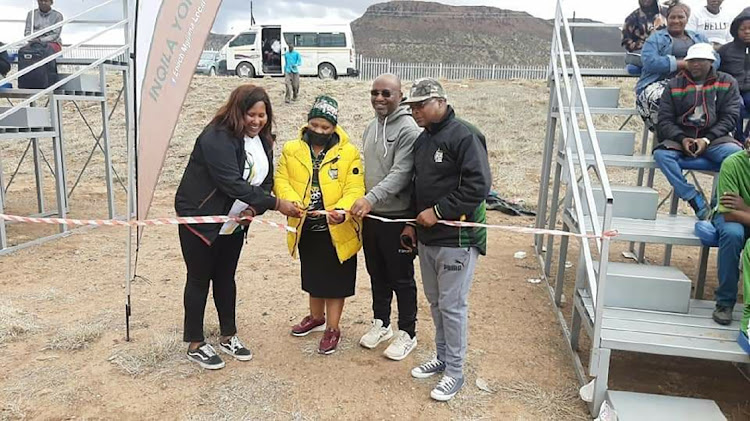 The ANC has taken a comfortable lead from early counting of votes in the Enoch Mgijima Municipality in the Eastern Cape where a controversial construction of a mediocre R15m sportsfield brought shame to the area.

Ken Clark, the multi-million businessman who wanted to stand as mayoral candidate for The Independents, said the eminent ANC victory was a slap in the face to those who wanted to bring change and turn the municipality’s fortune around.

The council has been placed under an administrator since March last year. Last month it was embroiled in controversy when ANC councillors unveiled Lesseyton sportsfield who pictures were shared on social media. However, a lot of people complained that it was not value for money which prompted provincial co-operative governance and traditional affairs (Cogta) MEC Xolile Nqatha requesting a full report from the council into the tender.

“I blame the bunch of people (ANC councillors) who have looted the municipality and have revenue to protect for the purpose of more looting. Unfortunately the reality of where I live is that we still have old people who get told that if they don’t vote for the ANC they will lose their social grants. ANC saw me as threat and had to pull all the stops to make sure they will and keep the revenue,” said Clark, 65, who owns softdrink company, Twizzer which has massive operations in Komani.

Clark put up his hand and launched the party two months before the elections following frustrations with the municipality in particular over the council’s unpaid Eskom bill which stands in the R600million region. He said bill has been a constant threat to the community.

“For a small and new party we have done pretty in certain wards and have stolen some votes away from the ANC, DA and EFF. I’m pretty impressed with our performance and we want to be king makers in the council. We want to go to council and shake things up and fight corruption and incompetence council,” said Clark.

DA caucus leader in the area Zuko Mandile said the success of the ANC was due to voter apathy.

‘It’s is unfortunate to get this result especially after the ANC has continued to show its incompetence and lack of care for people over the decades it has been in power here. The presence of The Independents, who have not national or provincial footprint, has also split the vote in this fragile municipality. The new players are causing uncertainty to voters but it’s good for our democracy,” said Mandile.

The Hawks have launched an investigation into the controversial R15m Lesseyton Sports Facility built in the Enoch Mgijima municipality.
News
3 months ago

The province has 30 municipalities, of which five are district councils. Only eight of its municipalities were hung in 2016.
News
2 months ago

The Eastern Cape EFF caucus said the sports field was a basic facility without anything to justify the millions of rand spent on its construction.
News
3 months ago

If the ANC ever felt invincible, the people of KwaZulu-Natal are showing the party that it is not too powerful to be booted out of power.
News
2 months ago
Next Article