As the kidnapping of the four Moti brothers enters its second week, the silence on their fate may be a sign there could be a resolution.

“Silence is crucial. When there is a media blackout on such a high-profile incident, such as this one, it usually means some kind of resolution to the event is close,” said Van der Merwe, who retired last month.

Two weeks ago seven gunmen attacked and kidnapped the Moti brothers — Zidan, 6, Zayyad, 11, Alaan, 13, and Zia, 15 — while they were being driven from their Crescent Street home in Polokwane’s Nirvana suburb to the nearby Curro Heuwelkruin School.

The assault occurred on the R37/N1 on-ramp when the attackers, who opened fire with R5 rifles and handguns, used a black Mercedes-Benz and white Kia Sorento to block the children and their driver and force them to stop.

Sources close to the investigation said it is believed the children were forced into a third car, possibly a silver SUV parked off the road in undergrowth,  and driven away in an unknown direction. 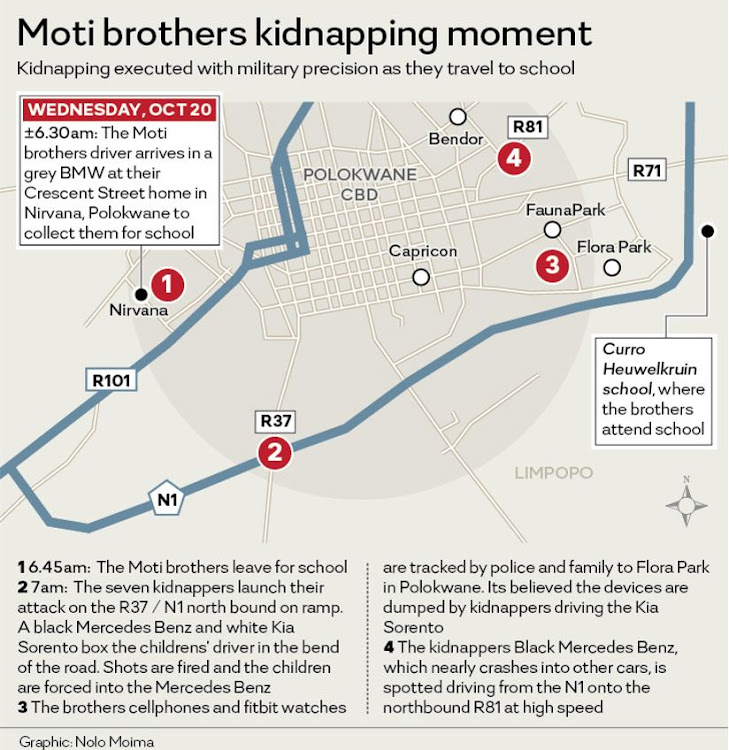 The moments leading up to the kidnapping of the four Moti brothers
Image: Nolo Moima

The brothers have not been seen since, with the kidnappers reportedly not making ransom demands for their release.

The kidnapping of four siblings, however, was “extraordinary”.

“This is uncharted territory in terms of SA kidnappings, with kidnappers usually taking one child,  usually the youngest.”

Huge teams work to save hostages

Broadly speaking, he said, media blackouts were desired, especially when negotiations were at a sensitive stage.

“It usually means a resolution of some sort is near, and things are coming to an end one way or another, with either the hostages about to be released or police closing in on the kidnappers.”

Van der Merwe said the number one objective in negotiations was the preservation of life, including the lives of the kidnappers.

“One never lies to a perpetrator and you always assure them you are there to resolve the situation peacefully and get everyone out alive, including them.”

He said the police team involved in securing the hostages' freedom would be immense, especially in cases such as the Moti kidnapping.

“There will be a core team of 10 senior officers, who, if children are involved, will include members of the family violence, child protection and sexual offences unit, detectives and a hostage negotiator.

“The officers on the ground can number nearly 200 people. They will include detectives, telecommunication specialists, cybercrimes investigators and crime intelligence officers. If force is required to free the hostages the team will include members of the special task force, national intervention unit and tactical response team.”

Payment of ransoms frowned upon

Complicating some hostage negotiations, he said, were the demands for ransoms, with payment often demanded in cryptocurrencies.

“Cryptocurrency is demanded as payment because of the difficulty in tracing its movement once paid. Ransoms also vary extensively depending on a family’s wealth.

“In SA the police do not condone the paying of ransoms. The problem is families, who often don’t trust the police to get their loved ones safely back to them, go behind the backs of negotiators and investigators to pay ransoms.

“Ransoms are not surety the hostages will be released.

“Negotiations around kidnappings, especially if a wealthy family is involved, can easily go on for a week or more. Families, if they doubt the police’s efforts to secure their loved ones, [could] keep contact with the kidnappers in secret and then pay the ransom

“As a negotiator this is one of your biggest fears as it undermines your work.”

He said kidnappings of foreign business people was on the rise in SA, especially of Chinese, Pakistanis, Somalians and Nigerians.

A representative of the Pakistani South African Association said it was concerned about the trend.

The representative, asking not to be named for fear of retribution, said after victims were released they did not speak about their ordeal out of fear they would be targeted again and the police could not protect them.

He said powerful gangs were behind the kidnapping of Pakistani and Bangladeshi businessmen and their families.

“In most cases, our own nationals [Pakistanis] are behind the kidnappings of Pakistani people. They need to be apprehended and deported.”

Police have denied a media report that arrests have been made in the kidnapping case involving the four Moti brothers.
News
6 months ago

Pupils went down on one knee and prayed for the four brothers to be safely reunited with their parents.
News
7 months ago
Next Article