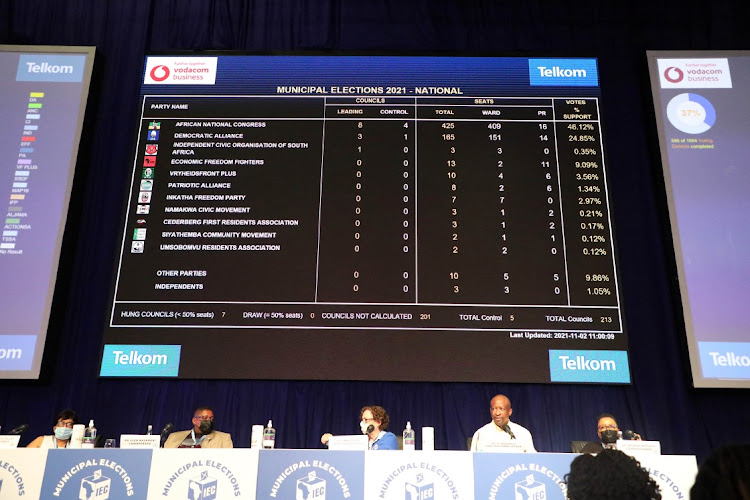 The Electoral Commission of SA (IEC) has defended its systems and the handling of the election process amid complaints of glitches by political parties, including the poor handling of the Voter Management Devices (VMDs) and shortage of ballot papers.

The counting of votes cast by millions of South Africans for different municipalities is underway and numbers continue to trickle in at the IEC’s Results Operation Centre (ROC) in Tshwane.

The Northern Cape was on Tuesday at noon leading in votes counting, with 74% of its results concluded, and was followed by the Western Cape at 46% and the Free State in third position at 26%.

The commission has, however, faced a backlash from some of the parties, with the DA indicating that it was contemplating to lodge complaints over some of the reported glitches.

“Clearly, what we are saying in that regard is to besmirch the integrity of an institution that has performed incredibly under pressure and has shown itself to be able to deal in a manner that is truly reflecting an impartiality and independence without any shred of any evidence is a problem,” Love said.

She said the IEC had been open about its needed areas of improvement.

The commission also defended the use of the newly introduced VMD, with chief electoral officer Sy Mamabolo saying it had improved the work of the IEC compared to the “zip-zip” machine used in previous elections.

A presiding officer in the eThekwini metro has been arrested after allegedly stuffing marked ballots into a ballot box, the Electoral Commission of ...
News
2 months ago

Mamabolo said much work had been done since the registration weekend to optimise functionality and improve the use of the devices in preparation of election day.

DA leader John Steenhuisen said the party had expressed its concerns and lodged disputes with the IEC, and that it was awaiting the matters to be dealt with by the party liaison committee before deciding on which further steps to take.

“We identified 151 voting stations across the country yesterday where there were significant problems with the device and where people were being turned back in significant numbers or giving up on the fact that they were not prepared to wait because of the rain or weather,” Steenhuisen claimed.

Mamabolo said the commission was expecting to finalise around 90% of the election results by Tuesday evening, while the final results would only be declared on Thursday.

The IFP also complained against the IEC, saying it had to reflect on its shortcomings and how they had adversely affected the integrity of the elections.

Mamabolo, however, warned that the poor voter turnout could have been influenced by the unwarranted attacks on the commission by political leaders.

“The commission would like to call upon all leaders of political parties to act and speak responsibly as the result collation process unfolds,” he said.

Meanwhile, Steenhuisen declared his party’s early victory in the Eastern Cape’s Kouga municipality, where it has been governing through a coalition since 2016. This declaration has, however, not been confirmed by IEC as yet.

Protests, inclement weather, arrests and electricity disruptions all marred the start of the voting day on Monday, the IEC said.
News
2 months ago

The ballot papers had been counted before the attack so the votes were not compromised.
News
2 months ago
Next Article