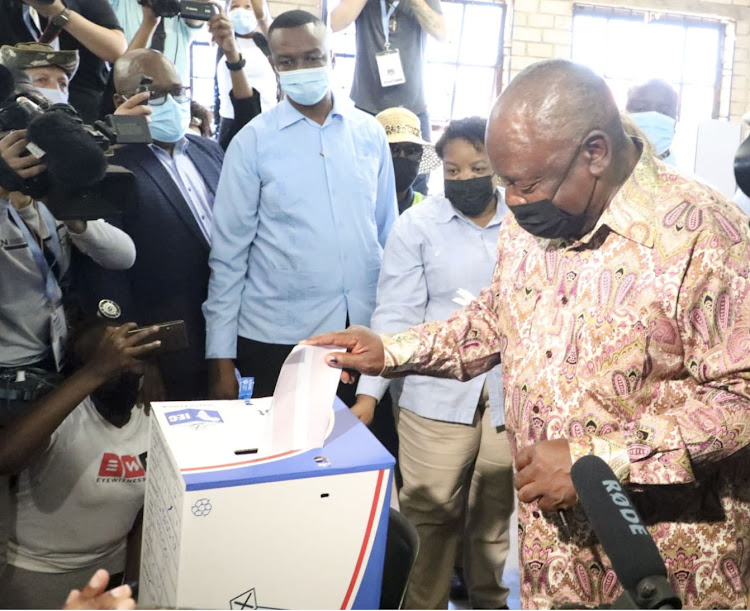 An upbeat President Cyril Ramaphosa has once again promised to improve service delivery as he urged South Africans to exercise their constitutional right by voting.

Ramaphosa, who was accompanied by his wife Tshepo Motsepe, cast his vote at Hitekani Primary School in Chiawelo, Soweto, on Monday.

His arrival triggered an eruption of excitement, with residents happy to see him.

Ramaphosa engaged with community members before casting his vote.

“My vote is my secret but you know who I voted for,” chuckled Ramaphosa shortly after voting.

Speaking to the media, he said he understood that residents of Soweto had been frustrated by the lack of basic services such as water and electricity.

“The provision of service delivery is a difficult and complex operation. Our people have reason to complain and through their votes, they are expressing themselves by either supporting a specific party or by voting in protest. We know what the problems are and they are clear. We want to correct what has not been going well,” said Ramaphosa.

He said he had criss-crossed Johannesburg with Gauteng Premier David Makhura and new Joburg mayor Mpho Moerane and engaged with residents regarding their problems.

“The mayor always had a book with him so that he could detail the challenges and needs of residents. In his book, he identifies the problem, then how he will address the problem and how much it is going to cost. This is how our candidates should be doing their jobs. We are in a different era of municipal service delivery and our candidates have to do things differently,” said Ramaphosa.

Despite this, he said his party was looking forward to an overwhelming victory in Gauteng and other provinces.

“I am happy that this is the culmination of months of campaigning and a lot of hard work has been invested into it. I am happy to see so many South Africans being excited about voting. I urge South Africans to go out in numbers and vote,” he said.

Makhura also engaged with the media and said the province had not experienced any voting-related disruptions.

“We have been going around to different voting stations and I must say that we have not seen anything that is worrisome. On the good side, we have seen that many residents came out to vote and we are pleased with that,” said Makhura.

Sowetan earlier on Monday reported that residents in Emaphupheni, near Daveyton, on the East Rand, had blocked roads and closed a polling station over lack of water.

Ramaphosa and Makhura were asked about the service delivery issues that have plagued Soweto residents and they both said that they were aware of them and that they were being attended to.

By 10am, only 148 people had made their mark at Marikana Combined School. IEC presiding officer Aubrey Koloko said they had expected around 5,000 ...
News
2 months ago

The new administration in the Emfuleni local municipality should prioritise starting a local economy that will address service delivery issues while ...
News
2 months ago

I forgot to register, but no regrets

A 19-year-old Wits student who is eligible to vote for the first time says he has no regret that he forgot to register and is now unable to ...
News
2 months ago

Mbeki was speaking at Holy Family College in Parktown where he casted his vote on Monday.
News
2 months ago
Next Article