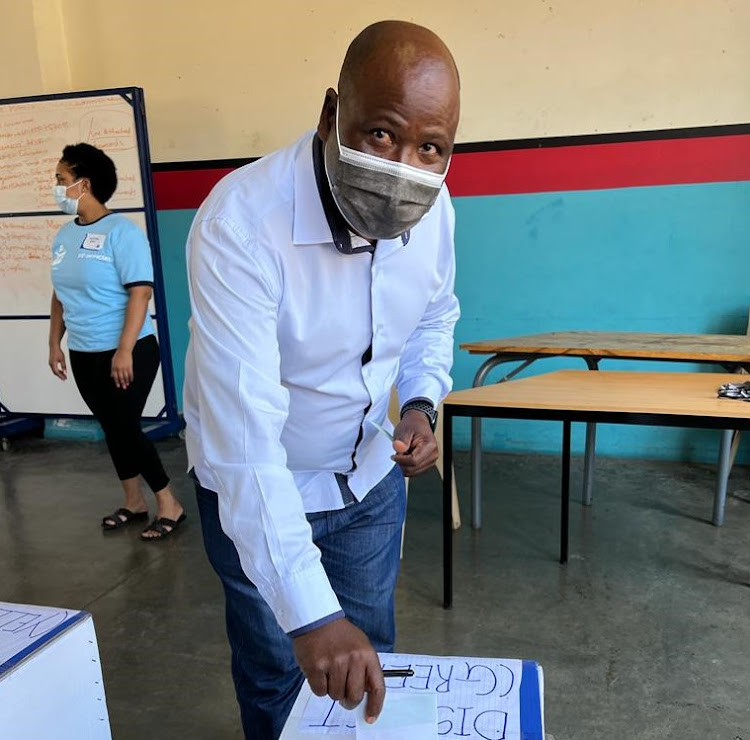 Gospel heavyweight Sipho Makhabane and Imbewu actor Vuyiseka Cawe were among celebs who cast their votes in the 2021 municipal elections at various areas across the country on Monday.

The entertainment industry superstars encouraged despondent South Africans to vote if they wanted to see change. Makhabane cast his vote at ward 30 in White River, Mpumalanga, because he wants to see change and more development in the area.

“I still believe in the power that comes with voting. As South African citizens, we should go out today to vote because that is the only way we are going bring change in our communities. I have voted because I understand that my vote will give me power to question if the elected counsellor fails to deliver. If you do not vote, you can’t even complain,” he said.

“I want to see this vote making sure that rural areas in Mpumalanga receive clean water, flushing toilets not the long drop (pit latrines) that they are using. They need to replace the bridges that were washed away by floods five years ago. I don’t understand why it is takes time to install pipes for clean water and to maintain our roads because the money is there.”

Makhabane has appealed to leaders who will be elected today to remember that they were put in positions to fight for the community and deliver services to them.

Former president Jacob Zuma on Monday called on ANC members to vote for the party.
News
3 weeks ago

“Councilors and mayors need to stop focusing on buying expensive and tinted cars and make sure they deliver on the promises. They need to listen to the people who put them in those positions,” he said.

Cawe, who plays the role of Nokuzola, voted at Berea Primary School in Durban. She said after voting: “I am very happy because I have voted and now I have a voice. Deciding not to vote because you are not happy with the way things are is not helping you at all.

“When you do not vote, you are allowing other people to speak for you. I would want my vote to change a lot about our healthcare system. I would like to see all people – whether poor or rich – being able to access the healthcare system.”

Gospel star Deborah Fraser, who was honoured at the weekend with an honorary doctorate of philosophy in sacred music by Trinity International Bible University, cast her vote in Bronkhorstfontein, a farming area in southern Johannesburg.

“I am happy that I have voted. I am voting for change. It is important for all of us to exercise this right and vote. We are voting for people that we believe will bring about that needed change. This Covid-19 has brought a lot of inequality and poverty,” Fraser said.

Musician Khanyo Maphumulo, who voted in Regents Park in Johannesburg, said she voted because her vote meant a lot. Maphumulo went out with her children and her nieces, some of whom were voting for the first time.

“I am excited as I am voting for the first time. My vote means a lot. If you do not vote, there will never be change. I voted because I want to see change.”

African Roots member Moscow Mmotsa was at the voting station at 9am. “I woke up early because I wanted to vote. With all the young and old parties promising changes, I had to vote,” Mmotsa said.

Mbeki was speaking at Holy Family College in Parktown where he casted his vote on Monday.
News
3 weeks ago

The community of Emaphupheni, near Daveyton on the East Rand, have shut down a voting station as they protest over lack of service delivery.
News
3 weeks ago

"I'm voting for clean water, I'm here today and the water flowing from my tap is still not drinkable," Marothodi said.
News
3 weeks ago

Residents of the troubled Emfuleni local municipality who cast their vote today say they are doing it for employment opportunities and to end service ...
News
3 weeks ago
Next Article