'I wish he was here': Mabopane residents vote in the shadow of murdered councillor Tshepo Motaung 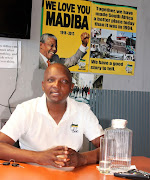 In Mabopane, the hometown of slain ward 22 councillor Tshepo Motaung, resident Monika Mokome, 81, said all she wanted was a house.

“I voted for ANC, I will die in ANC. They haven’t done everything that we want but the Lord will help us and they will do that. All I want is a house. I don’t have a house; I live in a shack. They must build the elderly houses,” she said.

In September, ANC councillor Motaung was shot at least 20 times by unknown hitmen in what was believed to be a politically motivated killing.

This prompted police minister Bheki Cele to establish a special task team in the area for potential attacks and threats linked to political violence in the lead-up to the local government elections.

Motaung was vying to be re-elected as councillor.

Speaking on Motaung's death, Mokome said: “It broke my heart. I was there with him when he was elected. When he died, I felt pain. I used to help him to do proof of residence.”

A first-time voter, 22-year-old Kabelo Legane, said he wanted to see change through his vote.

“Crime must stop. We want to see patrollers,” he said.

Letta Lekolwane, 65, said all she wanted was a job for her child and a house.

“I voted for my party. They set us free from the struggle. Since I started voting, I have been on the same side. Even if there are disruptions, I won’t change,” she said.

Maisie Legibile said she wanted the ANC to win.

“When they have won, they should do good things for us. We also ask our councillors to do good things and make changes. Our president must work for us. We want to live in nice places. We love Ramaphosa,” she said.

She said crime was a problem in the area.

Legibile said she hoped that the elected councillor would deal with crime.