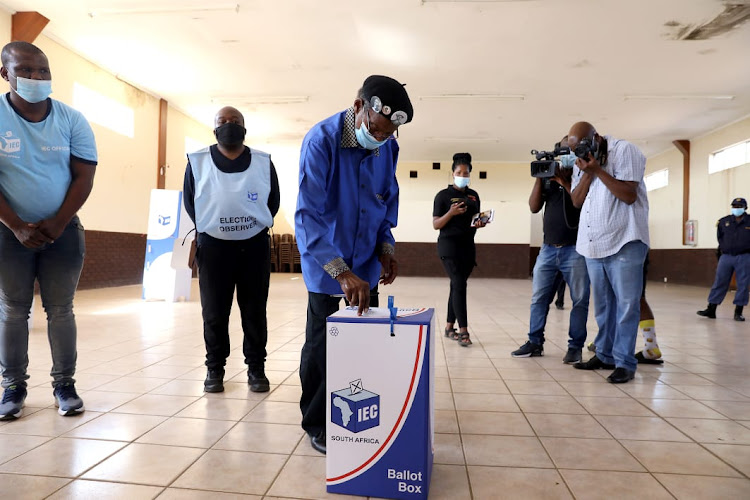 Prince Mangosuthu Buthelezi has praised the youth of SA for coming out to vote, adding that he was so inspired that his hopes for a prosperous country had been raised.

The IFP founder was speaking on the sidelines of his own vote-casting in KwaPhindangene outside Ulundi in northern KwaZulu-Natal on Monday.

“It gives me hope that young people, who are suffering more than anyone else in this country with unemployment and so on, have been advocating for and have the courage to ask others to go and vote,” he said.

As far as the IFP campaign was concerned, Buthelezi said party leaders, including president Velenkosini Hlabisa, had done everything they could to win the hearts of voters — and their fortunes were now in the hands of the electorate.

Buthelezi refused to speculate on how he thought the IFP would fare in the local government election, despite the party having performed so well in the past election that it reclaimed its official opposition status in the province.

He, however, raised concerns about dwindling municipal budgets, saying: “As a member of parliament, I know that, in fact, municipalities have very little budget. Because our country is in dire straits municipalities are getting less and less.

“In Zululand we did what we could with the resources we had but we could have certainly done more. However, we recently got an award so that indicates that we are doing something right, but as we get less and less we should not be surprised when municipalities are struggling,” said Buthelezi.

While the IFP campaigned throughout the province, hoping to increase its electoral share, it was clear that it aimed to not only retain the Zululand district, it intended to win it outright.

In the ending administration, the IFP governed three of the five municipalities in the district, while the ANC led two. Asked why any citizens who have not voted in Zululand should use the last hours left on Monday to vote for the IFP, Buthelezi said the party's record of clean governance remained its selling point.

“One thing I have emphasised in this election is that I will not insult the people during this campaign with promises. We have asked people to trust us because we ran a government here before democracy and there was not a whiff of corruption.

“Post-1994 we also governed this province and again there was not a whiff of corruption. People know they can trust us because our record in government speaks for itself,” Buthelezi said.

He emphasised the importance of local government, saying he hoped the voter turnout was more than in 2019 as “local government elections were at the heart of issues of the community more than national elections”.