If ANC councillors seek to enrich themselves ‘we will open the door for them’: Ramaphosa 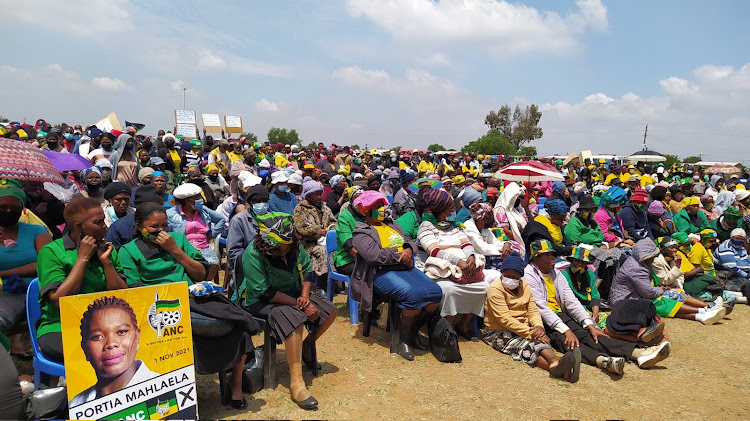 Locals came in their numbers to get a glimpse of ANC president Cyril Ramaphosa, who is on a campaign trail in the Free State. Ramaphosa addressed a community meeting at the Harry Gwala multipurpose centre in Sasolburg.
Image: Amanda Khoza/Sunday Times

“A lot of you don’t like it when I say ‘fellow South Africans’ because you are afraid that I am going to ban alcohol.”

This is how ANC president Cyril Ramaphosa greeted a throng of the ruling party’s supporters on Friday who had gathered at the Harry Gwala multipurpose centre in Zamdela, Sasolburg.

Ramaphosa started his local government elections campaign in the area by apologising: “I am so sorry I am late. There was another government engagement. Please forgive me."

He was meant to address the locals around 11am but arrived after noon. While locals waited for Ramaphosa, they were given ANC T-shirts and fruit.

Ramaphosa, who was accompanied by provincial convener Mxolisi Dukwana and other Free State leaders, told the community he was happy.

Ramaphosa told the community he was aware some communities were not happy with some of the candidates who had been elected.

“We promise to deal with the disputes after the elections,” he said.

He reminded candidate councillors that they had signed a pledge to serve the community.

“When you get to the municipalities, don’t go there and wear suits and forget about the people. Remember you are the one who is going to bring about the change the ANC wants to implement.”

Previously, Ramaphosa said there were people who were in municipalities “fighting their own battles. We’ve told them that if they do that, we will open the door for them. I have hope the municipality will be turned around.

“I know you’ve had problems with your municipality and that some of the things that were meant to happen did not happen.”

Ramaphosa said this would be addressed.

He told the community he wanted to see more women in the municipality “so they can work for women”.

He also told the crowd he wanted to see more young people working in municipalities.

“The youth have energy and their minds are open to work. That is why the Youth League is campaigning with us, to show young people have arrived.”

Ramaphosa said the party was on a “path of renewal and rebuilding. I am hoping that this election, South Africans can trust us again”.

He said at the party’s 2017 national conference the organisation discussed voter apathy in 2016.

“People were not happy with things like corruption and infighting and decided not to vote, even though they loved the ANC. They did this because they did not recognise what the party had become.”

ANC President Cyril Ramaphosa has received a warm welcome at the Harry Gwala multipurpose center where scores of people have been waiting to hear from him. @TimesLIVE pic.twitter.com/Vqf8u5ZBi0

He promised the ANC would do better.

“There is an issue of houses here that were not complete, there are stadiums that are incomplete. In 2017 at the conference there was a decision the ANC must be renewed. This thing of corruption showed us there was a snake in the house.”

He reminded the community that those who were charged with corruption have been told to step aside.

“We want to fix the ANC to be an organisation you can trust.”

Ramaphosa said the party will make sure those who had been elected would be held accountable.

“This is your ANC and we have done so much progress and we are cleaning the party of corruption because it is taking us back. Can you trust us again?

“We are tired of this Metsimaholo municipality not functioning properly.”

He told a group of residents who were carrying placards declaring their grievances that he had seen their complaints and they would be dealt with.

Ramaphosa said he had worked closely with former president Nelson Mandela, who taught him political ethics. He told the community Mandela would have made sure people get the services they deserve.

“We promise we will build houses that are high-rise flats. We want to get rid of all the shacks so our people can live in dignified houses.

“I know one of the most pressing issues here is unemployment. A lot of people here do not work and since 1994 we have created more than 8-million jobs. We will create jobs.

“We want our people to remain hopeful and know the ANC will change our people’s lives. We are going to end corruption in this municipality."

He said Sasol was the biggest employer in the area “and we need to sit down with them after the elections to discuss employing people. I know the issue of you wanting your jobs back will be addressed.

“Your area also has too many potholes and there is an issue of water and sewage. We know there are many problems. We are going to fix them. You need to work with us on November 1 to make sure volunteers bring 100 people to vote.”

Regarding Eskom, Ramaphosa said: “We have a big issue of electricity. We hope we can fix the electricity issue in the coming days and before November 1 so the matriculants who are writing  can write properly.”

EFF, IFP only parties open to alliances with ANC

The DA indicated that its main objective is to oust the ANC from power and also stated outright that it would not work with the EFF as the two ...
News
2 months ago

'It sounds like it’s never going to end': ANC wants answers on load-shedding

'We want to know what is going on with Eskom. Why is it that we can’t get a solid answer?' ANC deputy secretary-general Jessie Duarte said on ...
News
2 months ago

Aggrieved resident Marry Besani told TimesLIVE: “In 2018 employees went on strike because the municipality was dysfunctional after the mayor refused to employ the municipal manager.”

Besani claimed they were later dismissed for downing tools.

“We are here to say we want our jobs back. We have so many problems in the community. You go to the community and interview people about what needs to be done in the municipality.

“But with our current municipal manager we could not implement what we wanted to and when we fought for the community, we were dismissed.”

Besani said she will give the ANC another chance on Monday “but they must do the right thing”.

Another employee, Julius Moloyi, said he had worked for the municipality for seven years before he was dismissed.

“I was dismissed in 2018. We took the matter to the labour court but they dismissed 13 of us. We want to see fairness and justice and the president must deal with the people deployed by the ANC in the municipality who don't respect the ANC.”

Moloyi said he will vote for the ANC on Monday because “they are our family”.