SAHRC released its report into the water pollution in Tshwane, which has negatively affected resident in Hammanskraal and those along the city’s sources 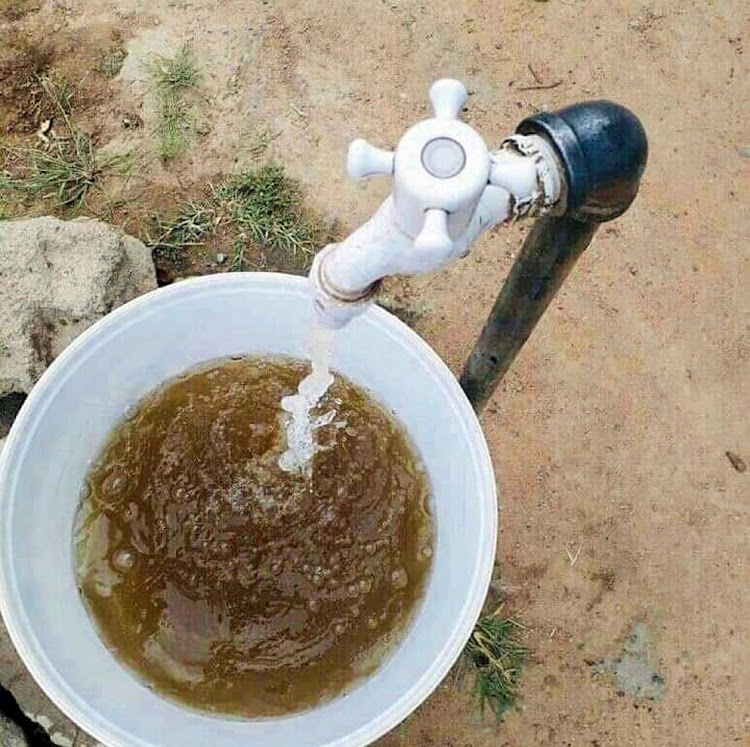 The dirty water that Hammanskraal residents fork out for each month.
Image: Keletso Mkhwanazi

It has been difficult three years for Gift Baloyi of Hammanskraal, northern Pretoria, as he tries to survive without drinking water from the tap in his home.

The 24-year-old construction worker has to drive 5kms to Mabopane to buy water on a daily basis, which he uses with his mother and younger brother.

He uses bottled water for drinking and cooking while the water that comes from the tap is used to wash laundry, sanitation and cleaning.

Baloyi said he spends R3,500 a month on buying water.

This has placed immense pressure on his finances.

“It is tough. Water is life. We cannot live without it,” Baloyi said.

The water that Baloyi buys is also used by his mother to cook and sell food on the streets.

His mother’s business has also taken a knock as customers are a little cautious of her food as they know that the water coming out of the taps in their area is contaminated.

“Sometimes my mother comes back with a lot of food which has not been bought because the customers suspect that she cooked her food using tap water that is contaminated,” Baloyi said.

Despite all these troubles to get drinking water, Baloyi still gets a bill at the end of the month to pay for the water that he cannot drink.

“We have lost hope in our government and we are tired of their empty promises,” he said.

The City of Tshwane will soon find itself in court, as the water and sanitation department said it would go the legal route to force the repairs of ...
News
1 year ago

Baloyi is one of many Hammanskraal residents that have been living under difficult circumstance due to the pollution of water resources in the City of Tshwane.

On Tuesday, the SA Human Rights Commission (SAHRC) released its report into the water pollution in Tshwane, which has negatively affected resident in Hammanskraal and those along the city’s sources.

The problem has been going on since 2008.

The SAHRC found that waste water treatment plants in Tshwane are malfunctioning and as a result rivers such Apies, Tolwane, Pienaar and Hennops and the Roodeplaat and Leeukraal Dams are being polluted with untreated and partially treated sewerage and sludge.

The commission said a sample analysis by Magalies Water Board and the Council for Scientific and Industrial Research showed horrendous levels of faecal coliforms and E. coli. Scientists found that people and animals who drink the water are vulnerable to illnesses such as bilharzia, cholera and hepatitis.

“Several times the department of water and sanitation communicated to the City of Tshwane that it must address the issue of water pollution but they did nothing. It is for that reason that we want those who were in management to be criminally charged,” said commissioner Jonas Sibanyoni.

Tshwane MMC for electricity, water and sanitation Phillip Nel said the city welcomes the findings but disagrees with the recommendation that national government takes over its plants as it has a history of failures.

Chairperson of the Hammanskraal Residents Forum, Tumelo Koitheng, said: “The report gives us hope as we can be able to use it if we want to take further legal steps against the municipality.”

The city, department of water and sanitation and provincial government have 60 days to respond to the report.

There is no end in sight in the struggle to get clean and drinkable water for residents of Hammanskraal, north of Pretoria.
News
2 years ago

EFF leader Julius Malema has welcomed the decision taken by Gauteng provincial government to place the City of Tshwane under administration, saying a ...
News
2 years ago

The Department of Water and Sanitation is taking the City of Tshwane to court over the poor quality of tap water in Hammanskraal.
News
2 years ago
Next Article