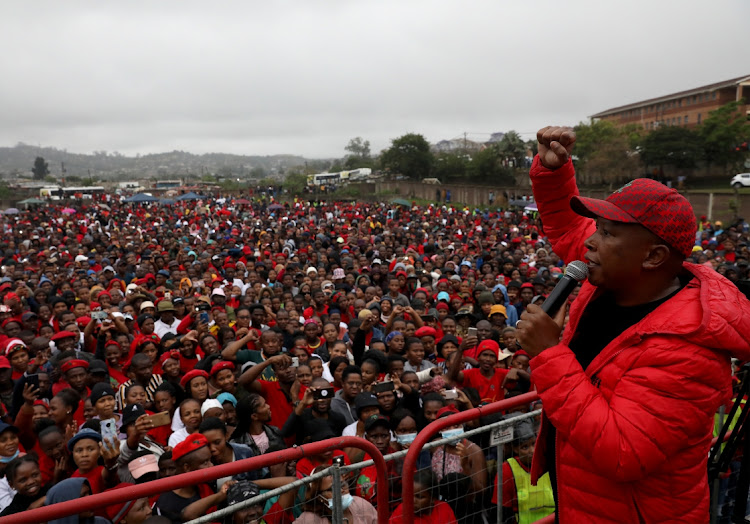 Access to flushing toilets may be taken for granted by some, but for many South Africans in informal settlements, they remain a luxury — and may just be what stands between a political party and an X on election day.

This was evident on Tuesday when EFF leaders told the community of Inanda, west of Durban, that the party will prioritise ablution facilities should they get a mandate to govern eThekwini metro from voters.

“We will build a three-bedroom house with a flushing toilet inside. We don’t want an outside toilet. There is no white, not even a single man, with an outside toilet. If you don’t give whites and Indians outside toilets, why do you give it to our people?” asked Malema, to resounding applause.

Malema said a flushing toilet is not a luxury but a basic necessity which all must have — and will under an EFF government.

“When you don’t have a flushing toilet you are not different from animals because after dropping you can still see. We must drop and there must be disappearance. You are not different to a cow because the ANC treats us like animals. We want to restore the dignity of our people,” Malema added.

More than 1,000 supporters and community members gathered to hear Malema speak ahead of the November 1 local government election.

Still using the toilet analogy, Malema asked the community of Inanda to remember his words on election day: “On the day you go and vote, you will pass by your outside toilet.  Before you leave — when you sit there — remember that you are the evidence of non-delivery of the ANC — it is the ANC that put you in a pit latrine.”

He said these were ANC government failures and implored people to reject the governing party at the polls.

He said that in order for three-roomed RDP houses with flushing toilets inside the house to be built, there should be land; his solution to that was to occupy land.

“We occupy some land and I don’t want this land that gets occupied away from town, we must occupy land next to town, because that is where things are, that is where the services are.

“When you occupy land next to towns, you are guaranteed they are going to build for you quicker because shacks embarrass them, so you must embarrass them by going to town, our land is non-negotiable,” he said.

Malema’s address focused on poverty, unemployment, lack of access to education and healthcare and lack of infrastructure. He said an EFF government will bring insourcing of labour such as security guards and cleaners at government facilities, free water and electricity for the poor that will be subsidised by those who live in suburbs, doubling of government grants for children and the elderly including financial allowance for unemployed graduates.

“I am happy I came here and spoke to you, now the choice is yours, you decide what you want to do on November 1, I will never force you. I can only speak the message of hope and the future, the people of eThekwini must decide what they want,” he said.

Malema said he did not mind whether the people of Inanda voted for the EFF as he had done his duty to liberate their mind.

“History will absolve me,” Malema added.

Before the 2014 general elections he called on AbaThembu to vote for the DA, but King Buyelekhaya Dalindyebo has changed his tune and on Sunday urged ...
News
7 months ago

ANC president Cyril Ramaphosa told a gathering of about 1,500 people that issues affecting the community should be prioritised.
News
7 months ago
Next Article