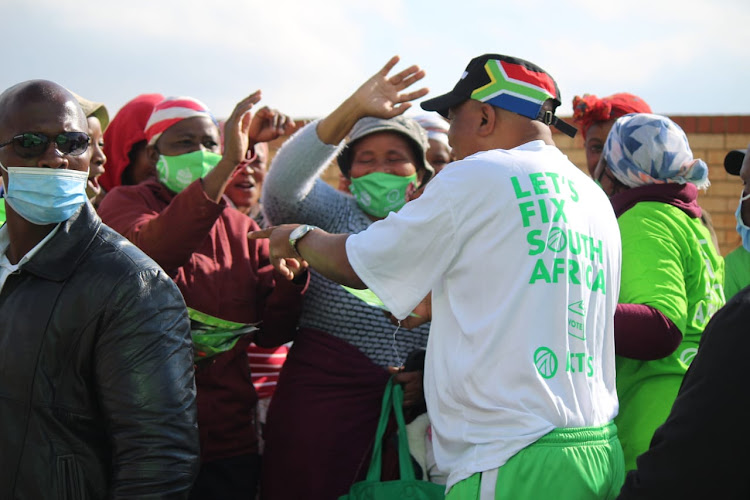 ActionSA is hoping to take full control of the city of Johannesburg after the November 1 municipal elections, according to party leader Herman Mashaba.
Image: ActionSA via Twitter

Political newcomer ActionSA is hoping to take full control of the city of Johannesburg after the November 1 municipal elections, despite its troubles with the Electoral Commission (IEC).

Party leader Herman Mashaba took the last push of his campaign trail to areas in Soweto on Tuesday, where he received a warm welcome from supporters.

With five days to go to the local government elections, he was pleading for votes from those who did not cast their ballots in the previous elections. He described his party as the only “real alternative” for the people of Johannesburg.

The party was embroiled in a battle with the IEC over the omission of its name alongside its logo on the ballot papers. In a bid to remedy this, it took the matter to the Electoral Court, asking that it compel the IEC to have its name or stickers added.

The court on Friday dismissed the bid, without immediately giving reasons.

If ActionSA is voted into power, it would fix the energy crisis by enabling independent power producers to supply electricity to the Johannesburg ...
News
3 months ago

Mashaba said the party respects the decision. “We have accepted the electoral court’s decision. As much as it is disappointing, we don’t know the reason why. If you look at this matter from a legal point of view, we don’t understand," he said.

Mashaba said the party is, however, not shaken and was intensifying its campaign.

“No-one is going to disrupt us. No-one is going to turn our attention away from the bigger picture of ensuring ActionSA participates. That’s why we immediately, upon the decision, went into high drive to ensure we educate South Africans to make sure they can vote for a party of their choice: ActionSA.”

Mashaba wants the electorate to vote the party out in 2024 if it fails to deliver on its promises.

“Give us an opportunity, but in the event we fail, 2024 is around the corner. Don’t wait for 24 years of another abuse — vote us out.”

Turning to coalition politics, he said if the party is voted into power, he maintained his position that he would consider working with other parties but completely ruled out the ANC.

“When voters have decided you must go into a coalition arrangement, there is nothing you can do. We believe in democracy, we believe in the constitutional framework of our country and that we must have regular elections.

“In the event people put us in a coalition arrangement, we are prepared to consider other parties. We are not going to engage anyone at this point until the election results are announced.

The ANC is pulling out all the stops to win back battleground metros it lost in the 2016 municipal elections, including in Johannesburg.
News
3 months ago

ActionSA loses court bid to have its name on ballot papers

The Electoral Court has ruled against new political party ActionSA in its bid to have its name added to the ballot papers being used for the November ...
News
3 months ago
Next Article