Senzo Meyiwa's alleged killers back in court on Monday 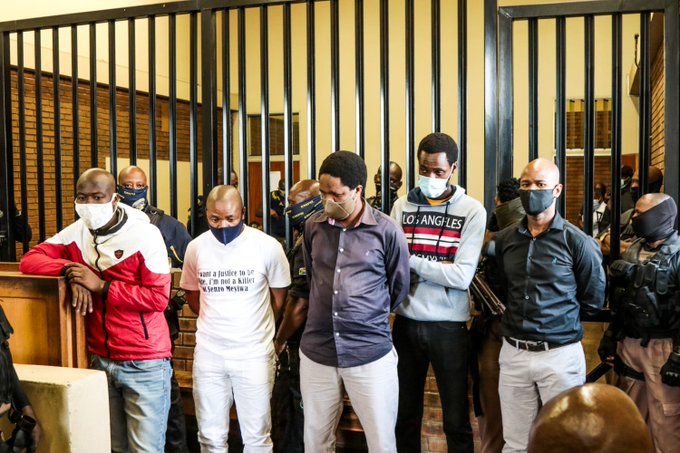 The five men accused of killing football star Senzo Meyiwa seven years ago are expected to appear in the high court in Johannesburg, sitting at the Palm Ridge magistrate's court, on Monday.

Meyiwa was gunned down in what was described as a botched robbery in Volsoorus, east of Johannesburg, in the presence of his girlfriend Kelly Khumalo, her mother Ntombi, sister Zandi, Zandi’s boyfriend Longwe Twala, his friends Mthokozisi Twala and Tumelo Madlala, and their son, who was four years old at the time.

The men were arrested in October last year in connection with Meyiwa's murder and they made their first appearance before the Boksburg magistrate's court.

During the first appearance, some of the accused refused to get into the dock, saying they had nothing to do with the murder of Meyiwa.

Mncube, Maphisa and Ntuli said they did not see the need to apply for bail as they were in custody on other cases.

Sibiya and Ntanzi did not apply for bail.

During the first appearance, Meyiwa's brother, Sifiso, expressed shock at the accused's denial of involvement in his brother's murder.

“I am shocked because the police are the ones who brought them here, alleging they have also made confessions. I was hoping they would step into the box [court dock], but they don’t want to enter,” Sifiso said.

Ntuli, who was arrested by the task team investigating political killings in the province, was  found guilty of the 2016 murder of ANC councillor Thami Nyembe, who was gunned down in Nongoma.

Ntuli's case was adjourned until December 9 for sentencing.

In March, the five men accused of Meyiwa's murder had their case transferred to the high for trial.

A notorious 32-year-old KwaZulu-Natal hitman, who has been implicated in the murder of former Bafana Bafana captain Senzo Meyiwa, has been convicted ...
News
9 months ago

The case against the five men implicated in the murder of Bafana Bafana and Orlando Pirates goalkeeper Senzo Meyiwa was postponed to March 5 in the ...
News
1 year ago

The case against the five men implicated in the murder of soccer star Senzo Meyiwa is set to continue in the the Boksburg magistrate’s court amid ...
News
1 year ago
Next Article