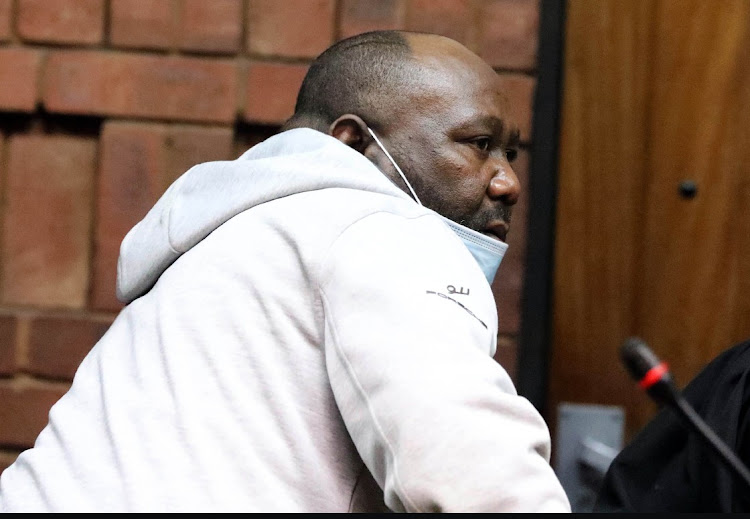 Senzo Mncube, the alleged triggerman in the Wandile Bozwana murder, appearing in court in this file picture.
Image: Antonio Muchave

The trial against four men accused of killing North West businessman Wandile Bozwana hit a snag after the defence requested a postponement.

Sipho Hudla, Robert Mathupha, Vusi “Khekhe” Mathibela and Bonginkosi Khumalo made a brief appearance in the North Gauteng High Court in Pretoria on Monday where the four were due to mount their defence against the state’s case.

Adv Annelene van den Heever asked judge Mokime Mosopa to postpone the matter until Tuesday as they could not consult with their clients due to imposed lockdown regulations that limit prison visits.

“We are only allowed to see our clients on Fridays for four hours,” Van den Heever told the court.

She also told the court their task was compounded by the death of Hudla’s lawyer, Adv JP Marais. “Accused one’s legal representative unfortunately passed on two months ago from a heart attack. So we have to consult with the accused to get up to speed with his case,” she said.

Mosopa granted a postponement and rolled the matter over to Tuesday.

During their last appearance in May, the four failed in their bid to have their charges dismissed.

After the state closed its case in the trial, which started in 2018, the defence for the accused brought a section 174 application, arguing that the matter be discharged as the state had presented no prima facie evidence proving that the accused had committed the crimes they were charged with.

Bozwana was murdered on October 2 2015. He and his business partner Mpho Baloyi were returning from Johannesburg when they were gunned down at the Garsfontein off-ramp in Pretoria.

Bozwana died, while Baloyi was injured.

In his judgment, Mosopa said the state relied on the doctrine of common purpose to prove that all the accused had acted with common criminal intent on the charges they are facing.

The state also led the evidence of two witnesses who saw the shooting, Baloyi and Adriaan Stander.

Stander, however, did not see who had shot at Bozwana and Baloyi.

Mosopa also said that trials within a trial had to be held to determine the admissibility of the pointing outs of Hudla and Mathupha and the confession statement of Khumalo.

The defence alleged that the accused were assaulted and forced to make statements by the police. Issues were also raised on material inaccuracies in the statements, which did not align with the state’s version of events.

Mosopa admitted the statements into evidence, finding that they were made freely and voluntarily.

In terms of the cellular data, Mosopa said the cellphones belonging to Hudla, Mathupha and Mathibela pinned their locations close to the movement of the cellphones owned by Bozwana and Baloyi on the day of the shooting.

Before returning to Pretoria, Bozwana and Baloyi were at Mandela Square in Sandton.

Mosopa also pointed out that CCTV footage taken from Mandela Square had identified some of the accused.

The court ultimately ruled that the evidence presented by the state had established a prima facie case against the accused.

“This in my view is evidence upon which a reasonable man acting carefully may convict, and further, there is a possibility that accused three [Mathibela] can be implicated by his co-accused in their case or cases and thus supplements the state's case,” Mosopa said.

Alleged triggerman in Bozwana's murder has been arrested after six years

A man who is alleged to have been the triggerman in the murder North West businessman Wandile Bozwana has been arrested.
News
1 year ago
Next Article