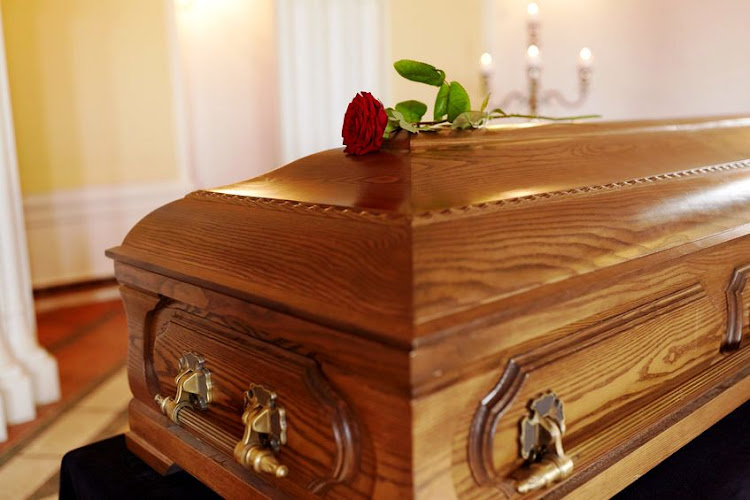 An Eastern Cape teacher has been handed a suspended prison sentence after admitting to falsely claiming R45,000 from two funeral policies in cahoots with a police reservist who faked his death.
Image: 123rf/dolgachov

An Eastern Cape teacher has been handed a suspended jail sentence for funeral policy fraud.

Sizile Mateta, 55, admitted fraudulently claiming R45,000 from two funeral policies in cahoots with a police reservist who feigned his death.

The regional court in Gqeberha sentenced Mateta on Friday after his conviction in August. The Hawks arrested him in January.

Capt Yolisa Mgolodela, spokesperson for the directorate, said the scheme was allegedly hatched by an insurance broker who recruited Mateta and other suspects between April 2014 and January 2015.

Mgolodela said the police reservist had two identity documents bearing different dates of birth, and the suspects allegedly used one of them for the scam.

Former police officer Nomia Rosemary Ndlovu, who was accused of killing her lover, sister, cousin, niece and two nephews to cash in on life and ...
News
7 months ago

“The​ broker is reported to have approached five of his insurance clients, of which Mateta was one, to take death cover policies for the reservist and lodge a death claim after the waiting period has lapsed,” she said.

​ “Apart from Mateta, other suspects included the broker himself, the reservist, daughter of the broker, a former SA Police Service member, another member of the public, a funeral parlour director and his clerk who claimed that the body was collected and buried by them. The last suspect is the late doctor who claimed to have certified the non-existent corpse dead.”

Mgolodela said the suspects were arrested after a forensic auditor from 1Life Insurance reported the matter to the Hawks in 2017.

“The investigations revealed that in January 2015, Mateta  lodged a R30,000 death claim for the purported dead police reservist with 1Life Insurance Company and a R15​,000 claim with Old Mutual, which were both successfully paid out,” said Mgolodela.

“The reservist is reported to have been working at Humewood police station in Gqeberha at the time. Mateta pleaded guilty on his first court appearance after his arrest on January 21 2021. This led to the decision by his attorney to request a separation of trials.​”

On Friday, Mateta was handed a two-year sentence which was suspended for five years on condition that “he does not engage in acts of dishonesty during the period of suspension”.

Mgolodela said: “He was further ordered to pay Old Mutual the R7,000 balance outstanding as he had already paid R8,000 as a refund for the R15, 000 fraudulent claim. Mateta has since paid ​1Life the R30​,000 he was paid for the fraudulent claim.”

The other seven accused, who have opted for trial,  will be back in court in November.

Seated on opposite ends of court 13 in the high court sitting in Palm Ridge on Friday, where judgment in the murder trial of Nomia Rosemary Ndlovu is ...
News
7 months ago

A woman who allegedly narrowly survived being killed by her sister is on Wednesday expected to take the witness stand in the high court sitting in ...
News
8 months ago

Rampant fraud remains a challenge for SA life insurers, which detected 3,708 fraudulent and dishonest claims to the value of R1.06bn in 2018.
Business
2 years ago
Next Article