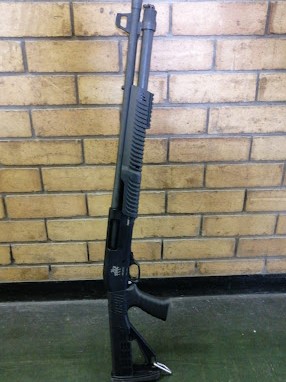 “Our endeavours to disarm gangsters in the province are proving to be fruitful,” said Traut.

“During the early hours of this morning Kensington detectives conducted a tracing operation in an informal settlement adjacent to 18th Avenue following a tipoff and arrested a 28-year-old suspect who was caught in possession of an unlicensed shotgun.

“The suspect, who is linked to a local gang in the area, is scheduled to make his court appearance in Goodwood [magistrate’s court] on Monday,” said Traut.

He said the two other suspects will appear in the Athlone magistrate’s court on Monday.

“In an unrelated police intervention, two suspects who are also regarded to be gang members were arrested in Manenberg last night in possession of an unlicensed firearm by members of the crime prevention unit,” said Traut.

The weapons and ammunition were discovered buried underground in Krugersdorp, west of Johannesburg.
News
8 months ago

A large amount of contraband, including dozens of cellphones, chargers, dagga, muti and cash were discovered during a raid at the Qalakabusha ...
News
8 months ago
Next Article