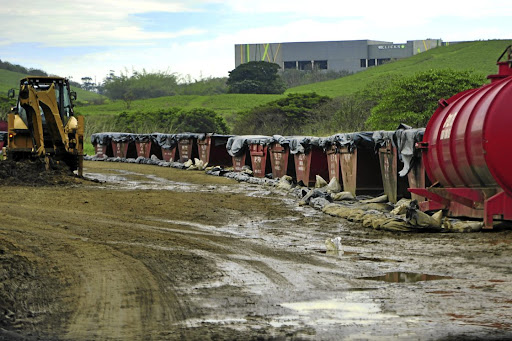 Dozens of skips line the banks of the Ohlanga River, storing hazardous waste that leaked out of UPL's chemical warehouse in Cornubia, north of Durban, which was torched during the unrest in July.
Image: Theo Japhta

Beaches north of Durban have still not been declared safe to open.

The eThekwini municipality said on Thursday that beaches which were affected by a toxic spill when chemical giant United Phosphorous's (UPL) Cornubia warehouse was set alight during unrest in July, remain closed until environmental authorities have reviewed scientific evidence.

These include all the beaches north of the Umgeni River including Umhlanga, Umdloti and Salt Rock.

“The beaches were closed by the city as a precaution to safeguard users against any harmful effects of the spilt chemicals.

“The city would like to reiterate that the beaches remain closed until the national department of forestry, fisheries and the environment and the KZN department of economic development, tourism and environmental affairs (Edtea) have considered the peer review findings that will make a determination on the environmental and toxicological risks, and related quality of the seawater for human safety.”

The city said the review process had “not been made any easier by UPL’s declaration last week of additional previously undisclosed product volumes, this after the submission of their final report recommending beaches to be reopened”.

The municipality said while it understood the impact of the beach closure on the public and tourism, the health of people “is of critical importance and this is our priority”.

An entire ecosystem, which includes the oHlanga tributary, the uMhlanga estuary, the beaches and the coastal environment, has been seriously affected ...
News
8 months ago

“The city took the precaution as it was unsure of the types and quantity of chemicals that had entered into the sea.

“The chemicals that had spilt from the UPL warehouse in Cornubia were highly toxic and caused severe environmental impact in the Ohlanga River and uMhlanga estuary.

“While extensive efforts have been made to rectify and remediate the polluted environments, the city still has the responsibility to ensure the safety of its residents and beachgoers and has therefore required scientific evidence that the beaches are safe for use.

“Authorities had earlier awaited the finalised consolidated and signed-off report from UPL’s specialists, which it only received on September 24. It was sent for independent expert peer review thereafter. The review findings are expected this week.

“The authorities will consider the findings from the independent peer reviewer after which a decision will be made on whether the seawater is safe for use and thereafter the two municipalities (eThekwini and KwaDukuza) will make the decision to review the beach closure,” said the municipality.

UPL said in a statement on Wednesday that its legal team had written to Edtea “expressing its concern over the continued delay in reopening the beaches...”

“The letter follows a meeting last week between UPL’s team of independent specialists and the department’s external reviewer who has been appointed to conduct a peer review of the report that was submitted to the department on September 24.

“The report presented the results of a chemical analysis of the beaches and seawater at the beginning of September and concluded that all the beaches and ocean outside a 1km exclusion zone, north, south and east of the mouth pose an extremely low chemical risk to the public, regardless of whether the estuary mouth is open or closed.”

The company said it is of the opinion “that all necessary information has been supplied for authorities to determine that the beaches are safe to be reopened.”