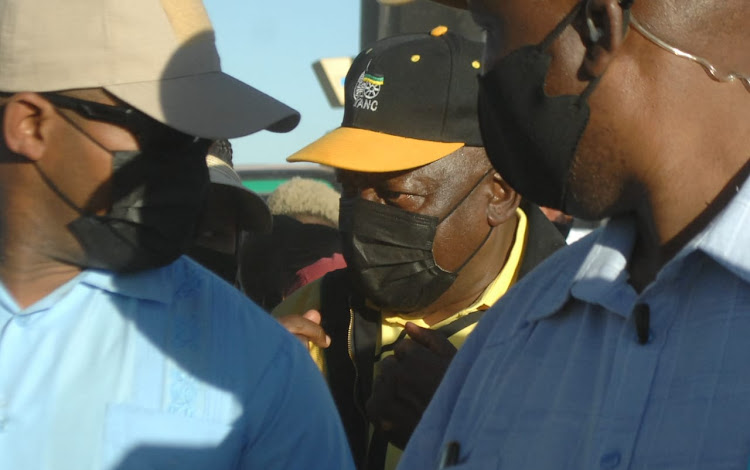 There was drama on Monday when the ANC elections campaign trail — led by its president Cyril Ramaphosa — landed in one of Free State’s most dysfunctional municipalities.

As the ANC hosted a rally to canvass votes for its Matjhabeng local municipality ward 4 candidate Lerato Mohapi, their outgoing councillor in the same ward, Stalin Liphoko, was staging a march outside his house when Ramaphosa’s convoy drove past.

Liphoko is disgruntled over being overlooked for another term.

Ramaphosa ignored protesting supporters of Liphoko who were singing “we will emerge victorious” in Sesotho as the convoy drove to and from the rally, held in an open field.

But at the rally, Ramaphosa said Liphoko would fall flat in his wishful thinking of defeating the ANC.

“I have absolute certainty we will win this ward. We reject those who have decided to contest us as independent. Down with them,” said Ramaphosa.

Liphoko was apparently asked to step aside despite being the community’s favourite because he faces domestic violence charges.

He, however, contests that this was meant to purge him as he had had the domestic violence charges dropped after resolving his issues with his wife.

But community members who are pro-Mohapi said Liphoko was an unrepentant “seasoned tsotsi” who was power-hungry.

As his supporters danced outside his house in Meloding, Virginia, Liphoko told SowetanLIVE sister publication TimesLIVE that he was going to allow the people’s choice be evident come November 1 when he stands independently toe-to-toe with the ANC’s Mohapi.

“I emerged in the community choice with 440 votes and comrade Lerato Mohapi who is now ANC candidate got 285 votes but the ANC decided they do not want who the community wants,” said Liphoko.

“We did not want to burn tyres, we decided because SA is a democratic country there are other ways to solve this problem ... I decided to contest as an independent because the people have spoken. I have the voice of the people behind me — and the numbers — and numbers never lie. We are going through this because our cry within the ANC  has fallen on deaf ears.”

Liphoko said he believed that his “purging” had to do with his assumed close ties with suspended ANC secretary-general Ace Magashule. 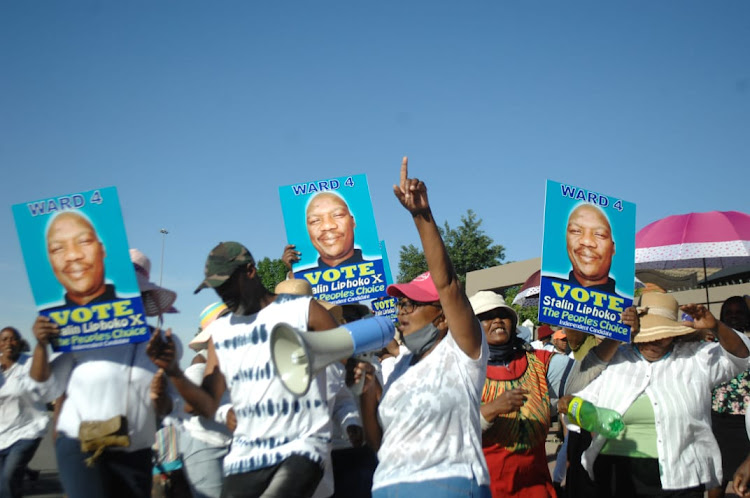 Stalin Liphoko's supporters gathered outside his house singing anti-ANC candidate songs. The outgoing councillor is contesting as an independent in the upcoming polls.
Image: Ziphozonke Lushaba

“Virginia is the second-biggest town in Matjhabeng but in all these wards people with experience in local government are all being removed and newcomers are being put in, and we feel it is all deliberate.

“I say this because democratic processes of the ANC are rigged to favour other candidates and people are purged because of the assumption that we have been here during the era of former premier Ace Magashule.”

Mohapi’s supporters, who live in his street which is one away from Liphoko, defended their candidate as the legitimate candidate, saying Liphoko was a criminal who had failed while given the chance.

They brushed off accusations that the ANC bused in people from elsewhere to camouflage Mohapi’s lack of community support.

Said one of the supporters who asked not to be named: “The reality is that Ntate Liphoko did not serve us well. He has been serving this whole term and failed us. He was so arrogant that if a community member went to his house seeking help he would shut the gate in your face and tell you to make an appointment — though we elected him.

“There was no purging, this guy is bad news and an outlaw. First he has a pending case of domestic violence, then he has a five-year suspended sentence for promoting illegal land invasion and is suspected of having a hand the shooting of an ANC community organiser which is the reason President Ramaphosa came here.”

Ramaphosa has concluded his campaign in the Free after addressing 11 community meetings in two days.

He will be back in Gauteng on Tuesday at the Alberton Civic Centre to address the launch of the ANC elections event.

Suspected political-related killings have increased in the run-up to local government elections on November 1.
News
3 months ago

An eThekwini councillor candidate was shot dead in Durban on Friday night.
News
3 months ago

ANC president Cyril Ramaphosa avoided any interaction with the media on Friday after Thursday's hostage drama.
News
3 months ago
Next Article