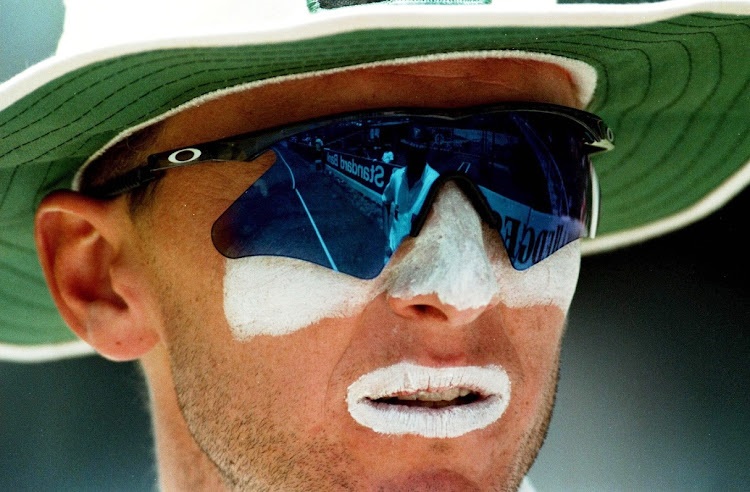 Allan Donald was a fan of zinc oxide to protect his face in his days as a Proteas star bowler.
Image: Arena Holdings archive

The zinc oxide cricketers use to protect their faces from the sun causes sunscreens to become ineffective and toxic when it is added to them‚ American and British scientists have found.

After reporting their findings on Thursday‚ the researchers warned sunscreen users to avoid products that contain zinc oxide.

Co-author Prof Richard Blackburn‚ of the University of Leeds in the UK‚ said: “We still recommend consumers use sunscreen but suggest they should be careful to avoid mixing sunscreen with zinc oxide.”

Blackburn and counterparts from Oregon State University in the US found the addition of zinc oxide means sunscreen loses much of its effectiveness after two hours' exposure to ultraviolet radiation.

The adulterated sunscreen was also toxic to the embryos of zebrafish‚ which are similar to humans at molecular‚ genetic and cellular levels‚ meaning many zebrafish studies are directly relevant to people.

US researcher Claudia Santillan said: “The zinc oxide-induced photodegradation products caused significant increases in defects to the zebrafish we used to test toxicity.

“That suggests zinc oxide particles are leading to degradants whose introduction to aquatic ecosystems is environmentally hazardous.”

Reporting their findings in the journal Photochemical & Photobiological Sciences‚ the research team said they wanted to answer important questions about the sunscreen market‚ which is estimated to be worth $24bn (about R356bn) annually by the end of the decade.

“Sunscreens are important consumer products that help to reduce UV exposures and thus skin cancer‚ but we do not know if the use of some sunscreen formulations may have unintended toxicity because of interactions between some ingredients and UV light‚” said Prof Robyn Tanguay from Oregon State's environmental and molecular toxicology department.

What the public thinks about sunscreen safety has caused manufacturers‚ often based on limited data‚ to use lots of some ingredients while limiting others‚ she said.

“Sunscreens containing inorganic compounds like zinc oxide or titanium dioxide‚ that block UV rays‚ are being marketed more and more heavily as safe alternatives to the organic small-molecule compounds that absorb the rays‚” she said.

The researchers made five SPF15 mixtures containing the UV filters — the active ingredients in sunscreens — from different products available in the US and Europe. They also made additional mixtures with the same ingredients‚ plus 6% zinc oxide.

“Zinc oxide degraded the organic mixture and caused a greater than 80% loss in organic filter protection against ultraviolet-A rays‚ which make up 95% of the UV radiation that reaches the Earth‚” Santillan said.

Are DIY sugar waxes and drinking chlorophyll good for your skin?

Beauty trends come and go. There are things we’re never going to do again and things that have become canon.
Good Life
7 months ago

All you need to know about collagen

In the beauty business the contents of the fountain of youth change every year. Enthusiasts and beautypreneurs discover a miracle ingredient ...
Good Life
8 months ago

Beauty: Dr. P fills us in on aesthetic beauty treatments

Doctor aims to use aesthetic medicine to help patients look better and be more confident.
S Mag
3 years ago
Next Article