Hostage situation was 'not a crisis', says ANC’s Pule Mabe 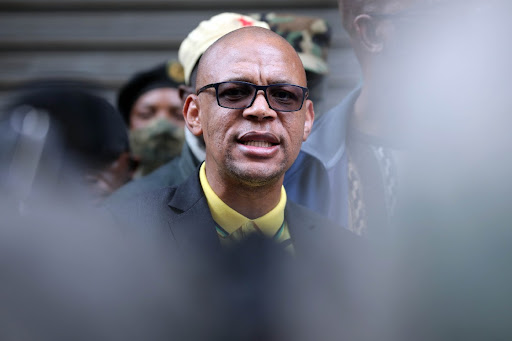 ANC national spokesperson Pule Mabe on Friday said the dramatic situation which unfolded on Thursday night - where disgruntled military veterans held ministers Thandi Modise and Mondli Gungubele “hostage” - should not be viewed as a crisis.

“It is not so much a crisis. You would know that leading up to the meeting that the liberation war veterans had yesterday, they came to Luthuli House earlier in the week to raise their issues on Monday.”

TimesLIVE reported on Thursday evening that 56 people were arrested and they are likely to face charges of at least three counts of kidnapping. Three of the people arrested were taken for medical checks.

Speaking to the media on the sidelines of an election campaign in Tshwane, Mabe said the issues that were raised needed the attention of the government.

“There is a process and a task team that is being led by the deputy president that has got to deal with the plight of the military veterans, who have now organised themselves under the liberation struggle war veterans.”

Mabe explained that there was a stalemate on Thursday night.

“Comrade Mondli Gungubele, in his capacity as the minister in the presidency, and comrade Thandi Modise, in her capacity as dealing with military veterans, were to meet them to try to see that the issues that they were raising could be addressed, but also give them feedback on the process happening at that level.”

He said the ANC was not at liberty to get into matters that the government needed to address for the veterans.

“We are comforted that there has been action taken by the SA Police Service to restore calm and stability there.

Mabe said one of the things the ANC always appeals for, is to make sure that people listen to one another.

“If you are going to register your concerns, you ought to listen to the work being done by the government to resolve the problem. But if you do not, you will not be able to know that there are interventions being undertaken.”

Defence minister Thandi Modise was reportedly "held hostage" at the St George's Hotel in Tshwane on Thursday.
News
7 months ago
Next Article