EFF gets blessings from Bahlaloga king 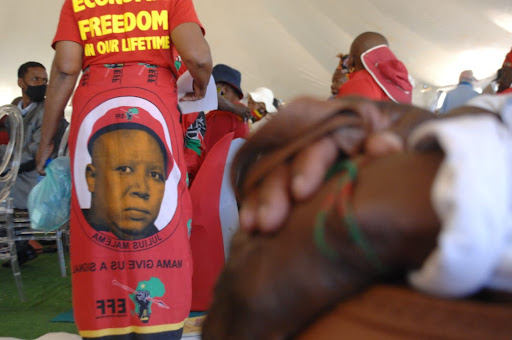 Moletsi in Julius Malema's hometown of Polokwane was a hive of activity on Thursday as the red berets introduced their manifesto and candidates to King Solly Moloto.
Image: Ziphozonke Lushaba

EFF leader Julius Malema on Thursday went back to his roots in Moletsi, Polokwane, at the Bahlaloga royal house to introduce councillor candidates to King Solly Moloto.

For his gesture, Malema and the EFF earned themselves Moloto’s blessings, as he wished the party well ahead of the November 1 local government polls.

Moloto was all praises for Malema, saying the man he knew was different from the "rabble-rouser" known by many. According to Moloto, Malema is a simple man who recognises and respects his roots — and the royal house.

It was Malema who informed the royal house in 2011 when the ANC occupied Polokwane for its January 8 celebrations. Furthermore, said Moloto, when Malema married his wife Mantwa, he took her to the royal house to introduce her.

Most recently, in 2019, the royal house started an education trust for pupils who cannot afford tertiary education and Malema was among the first to donate, contributing R100,000.

“I am not campaigning but I will not be one to praise people for their good deeds when they are no more,” said Moloto. “I thank him [Malema] for his humble being and love for the people of Moletsi. He knows where he comes from.

“But this one I am talking about is not the one on TV and in politics. When Julius is home, he lives the way his people live and is grounded in his customs and traditions of his people. I say all the best and blessings to the candidates.”

Malema promised to prioritise traditional authorities, especially those from Limpopo who he said were not treated equally with other royals.

There is no shame in bearing as many children as you want - and even if you cannot feed them yourself, the government will do that on your behalf.
News
3 days ago

Should the EFF win Limpopo municipalities, there would be a tractor for every ward to encourage agriculture to fight poverty.

Malema said he was confident the EFF would double its support in the Capricorn district municipality from the 27% it achieved in the 2016 elections.

When this happens, traditional authorities would not be left out, he said.

“We will insource all security guards, cleaners and maintenance workers of the municipality because these are jobs that do not need skilled workers,” said Malema.

“We want the whole Capricorn district municipality to be under the EFF and we will work with royal authorities to achieve more."

Malema donated a cow to Moloto as a gesture of appreciation for his support.

Malema: Parents should put their children before ‘ANC T-shirts’

“The elderly must not feel bad for not voting for the ANC. It is no longer the same,” claimed Malema.
News
5 days ago

The EFF aims to create thousands of jobs while improving service delivery should it take over the ailing JB Marks municipality.
News
5 days ago
Next Article